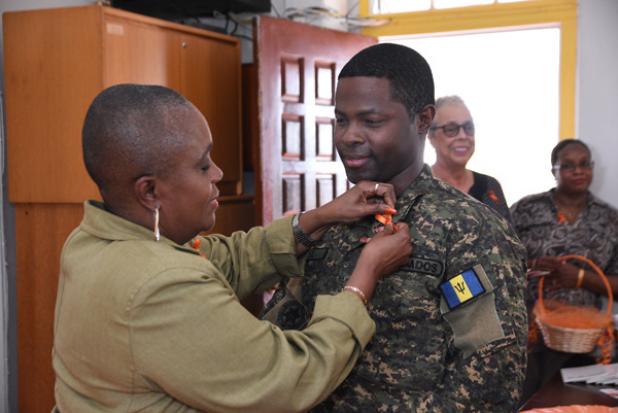 Today, on World Sickle Cell Day, the Hope Foundation continues to lobby for mandatory screening of newborns for this inherited blood disorder.

President of Hope Foundation, Shelley Weir, reiterated the need for early diagnosis, stressing that it is key to ensuring healthy and successful lives for sicklers, given the fact that babies with sickle cell usually appear normal at birth and only show signs of the condition after several months.

She said that with screening, babies with the disorder would be detected before complications occur.

Weir was at the time addressing a press conference held yesterday in observance of the 10th anniversary of World Sickle Cell Day, at the Barbados Defence Force (BDF) Headquarters.

“We have repeatedly advocated for this screening to be done. If we can have this facilitated in Barbados, we are confident that we would be able to answer the question of how many people in Barbados have sickle cell disease or the trait. Such testing will help to ensure that we can answer that question, but even more importantly, that those persons afflicted can have early access to treatment.”

It is also Hope Foundation’s desire that persons interested in starting families have that genetic test done. The goal is to know whether or not the family carry the sickle cell trait and if there is the possibility they could have a child with sickle cell anemia.

Furthermore, high on the Hope Foundation’s list of priorities for sicklers is pain management. Weir explained that sicklers experience intense pain and often times, excruciating pain which can be acute or chronic.

“In 2001, because sicklers were being told at the Accident & Emergency Department at the Queen Elizabeth Hospital that they were neither accident or emergency, we called for them to be treated with the same priority as asthmatics. That call was thankfully heeded and it is important that it continues to be the order of the day,” the President stressed.

“Managing the pain of this disease has always been a major concern and has at times been ineffective, leading unfortunately to some patients being hooked on the medication prescribed to them, doing creative things to ease their pain such as forging prescriptions, injecting themselves and so on.”

While there may be a cure for sickle cell disease, Dr. Cheryl Alexis, Haematologist and Member of Hope Foundation’s Medical Advisory Board expressed that it is only “doable” in a small percentage of the sickle cell population.

“Those who have a sibling who matches them and that is basically about 10 per cent of the population,” she pointed out.

“So, in the meantime, we have to rally around our sickle cell community, help them as we can because the management is not only pharmacological, but it is also psychological…The persons who do well are the ones who have a lot of support rallying around them.”

Dr. Subira Hinds, who has battled sickle cell since childhood, shared that it is not easy living with the disease.

She said there are times when she is so ill that she cannot even bathe herself; so fatigued that an hour can seem like an entire day, and the painful crises are the worst.

“I have my family and friends who are all in my corner…Good support, education, quality medical care and self-advocacy all played roles in my life and my success. The whole community has a part to play when it comes to dealing with sickle cell - the individual, parents, teachers, church, employers and doctors just to name a few,” said Dr. Hinds, a member of Hope Foundation for over 20 years.

“I always wanted to do more for persons such as myself and contribute in some way to others who either have the condition or know someone with the condition. As such I became a member helping to raise awareness and advocate for sickle cell warriors.”

For some 10 years, World Sickle Cell Day has been commemorated every year on June 19th and Hope Foundation has been steadfast in its efforts to ensure that Barbados’ knowledge about this blood disorder, which can be lethal, is greatly enhanced. (TL)