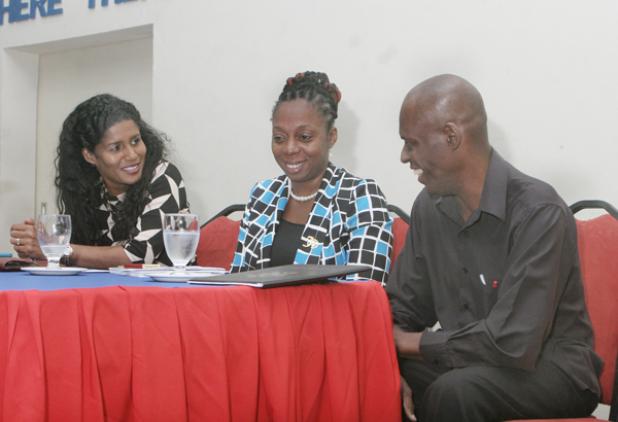 From left: Minister of Labour, Dr. Esther Byer-Suckoo; General Secretary of the BWU, Toni Moore; and Historian and Principal of Queen’s College, Dr. David Browne, sharing a moment at the head table. 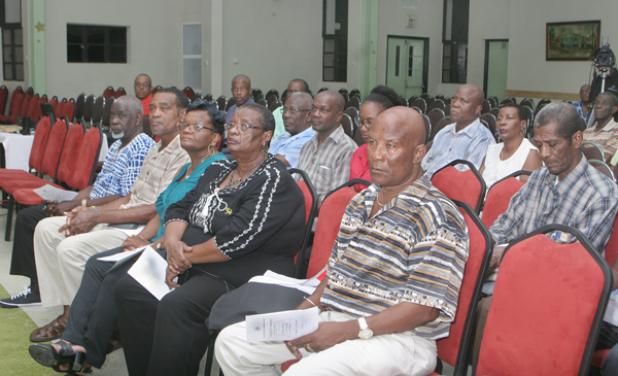 Some members of the public who attended the first of the lecture series.

Sat, 07/23/2016 - 12:00am
By:
Peta Rowe-Forde
THE Minister of Labour, Social Security and Human Resource Development, Senator Dr. Esther Byer-Suckoo, is giving the Barbados Workers’ Union (BWU) the assurance that tripartism and social dialogue are important to the Labour Office.
Offering remarks at the first instalment in a series of lectures hosted by the BWU, in commemoration of its 75th anniversary, the minister took the opportunity to publicly thank the Union for its work over the years, and implored the youth to be involved in future plans of the Union. She made that appeal while noting that many young people do not know of a time where workers’ rights simply did not exist.
Indeed, Dr. Byer-Suckoo stated that many milestones coincide in this year, but the BWU, in particular, is celebrating more than just another birthday. She explained that it is more about the journey than the milestone and being the first legal trade union in Barbados, the BWU has much to be proud of.
While the Labour Minister admitted that she is too young to recall all the predecessors of the union, she stated that the Labour Department and the union have long worked together to achieve and enforce rights of workers. One such example is the Universal Adult Suffrage, which allowed citizens the right to vote.
Speaking more specifically to her time as Minister of Labour, Dr. Byer-Suckoo explained that the BWU would often offer support when legislation related to employment and workers’ rights would be met with opposition when being debated in Parliament. In fact, Byer-Suckoo referred to the union as being the wind beneath the Labour Department’s wings. Out of this ongoing collaboration, according to Byer-Suckoo, improvements are being seen in the Employment Rights Act, Sexual Harassment Legislation and the Holidays With Pay Act.