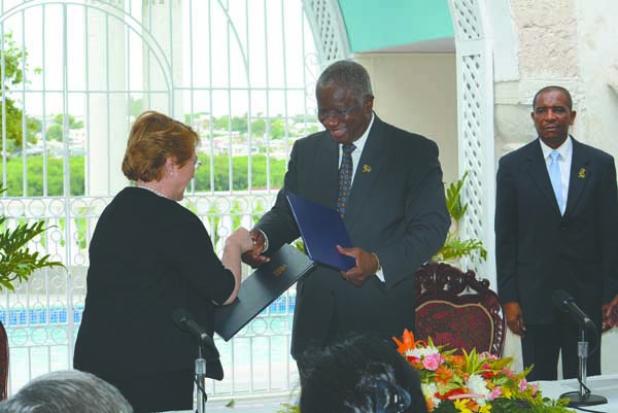 Prime Minister of Barbados, The Rt. Hon. Freundel Stuart (right) and President of the Republic of Chile, Her Excellency Michelle Bachelet, as they exchanged copies of a Joint Declaration which the two leaders signed yesterday, outlining the areas of bilateral cooperation being pursued between Barbados and Chile.

President of the Republic of Chile, Her Excellency Michelle Bachelet, paid an official visit to Barbados yesterday.

During her brief stay, President Bachelet met with Acting Governor General of Barbados, Sir Philip Greaves in a courtesy call at Government House, after which she joined Prime Minister of Barbados, The Rt. Hon. Freundel Stuart and senior Government officials at Ilaro Court for a working meeting.

During the bilateral discussions between Prime Minister Stuart and President Bachelet, the leaders highlighted the strong relationship between their nations, reflected in engagement at the highest political level and their commitment to strengthening the existing ties.

“The President of the Republic of Chile, Her Excellency Michelle Bachelet and I met today to discuss issues of bilateral interest to both our governments and our people. We had a chance to assess the state of our bilateral relationship, which was formalised in 1967 when we established diplomatic relations,” Prime Minister Stuart remarked during a press briefing.

“We both agreed that a solid foundation has been laid to encourage trade in goods and tourism flows between our countries, with the signing of an Air Services Agreement. Chile’s generous technical assistance programme, executed by the Chilean International Agency for Cooperation and Development, has been playing an important role in building capacity among our public servants across a range of disciplines, critical for our development, including in adaptation to climate change, disaster management and methodologies for teaching of Spanish as a second language,” he added.

“The Joint Declaration which we will exchange (today), outlines these areas of bilateral cooperation being pursued between Barbados and Chile, as well as cooperation at the regional level of CARICOM and in the international arena,” he also stated.

A number of challenges facing both countries were also discussed. According to the Prime Minister, consideration was given to how the two countries could work together on international tax matters, especially in light of Barbados’ continued interest in concluding negotiations between the respective tax authorities for a double taxation agreement; to implement the Paris Agreement on climate change; to preserve and protect the oceans and seas for future generations and to increase and enhance trade with Chile, in the areas of goods in the first instance, and later trade in services.

“It was my pleasure to engage President Bachelet on these issues of importance to both our countries. I believe that the President’s official visit to Barbados and our meeting today, is testament to the strong bilateral ties between our countries at the highest political level and our commitment to the strengthening of our relationship,” the Prime Minister then announced.

President Bachelet also acknowledged the “strong relationship” between Chile and Barbados, noting that this year will mark 50 years of diplomatic relations between the two countries. Stating that the visit served “as a unique opportunity to strengthen our ties of friendship”, she too acknowledged the many areas to be worked on, as outlined by Prime Minister Stuart.

Highlighting the importance of technical cooperation as a pillar of Chile´s foreign policy, the President of Chile meanwhile expressed her satisfaction that many Barbadian citizens have participated in the programmes developed by the Chilean International Cooperation Agency for Development. In this regard, she pointed out the additional development initiatives underway, which focus primarily on adaptation to climate change, disaster management, and methodologies for the teaching of Spanish as a second language.