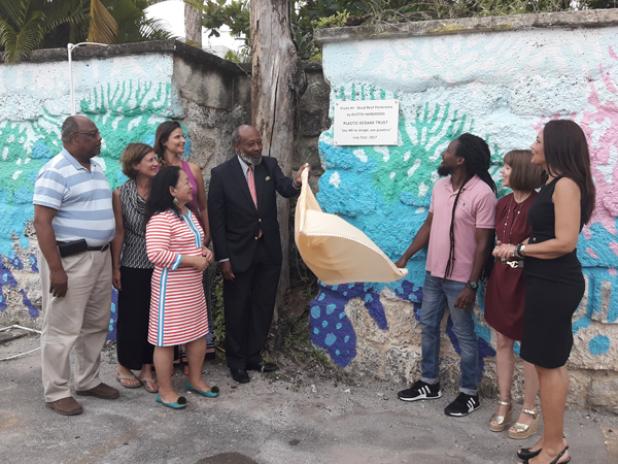 Executive Trustee of Plastic Oceans Trust, Sir Trevor Carmichael unveiling the plaque for the Trustee’s mural ‘Say No to single use plastics’, alongside artist Professor Dustin Harewood and Trustee members.

Plastic Oceans Trust is calling on Barbadians to “think reusable, not disposable” by pledging to refuse single-use plastic.

The registered charity, founded in January this year, is on a mission is to create a wave of change for a healthy, pristine and sustainable Barbados.

“Concerned by the massive proliferation of plastic products and its impact to our health, environment and economic prosperity, Plastic Oceans Trust was formed to build partnerships with stakeholders across Barbados, to tackle this global dilemma locally and position Barbados as a regional leader in bio-gradable enterprises,” expressed Trustee, Connie Smith-Young.

Addressing the unveiling ceremony of the Plastic Oceans Trust mural “Say No to Single Use Plastics”, at Cave Shepherd Worthing carpark on Monday evening, she stressed that the proliferation of plastic products in the last 70 years has been extraordinary.

“The millions of tonnes of plastic bottles, bags and garbage in the world’s oceans are breaking down, leaching toxins, posing a threat to marine life and of course human beings. Plastic materials in landfills sink harmful chemicals into ground water. Chemicals added to plastic are dangerously absorbed by humans and are life altering to our hormones,” she pointed out.

Smith-Young took the opportunity to thank the artist behind mural, Dustin Harewood, a professor at Florida State College.

Professor Harewood, who also shares the same passion for the environment as Plastic Oceans Trust, revealed that the art work – completed within one week – is part of a series: Study # 4 – Dead Reef Panorama.
(TL)