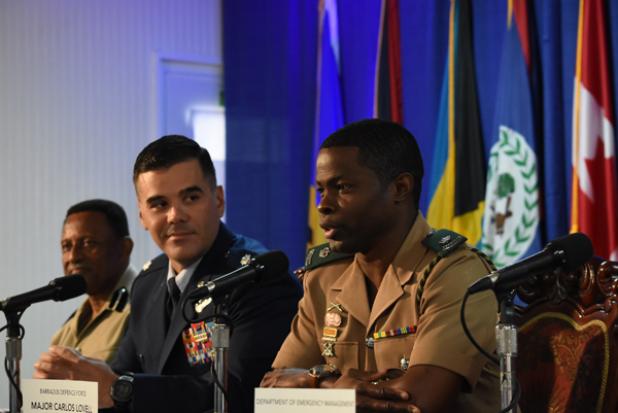 BARBADOS’ capability to fight the scourge of illegal drugs, firearms and human trafficking, is set to be boosted when the upcoming Exercise TRADEWINDS hits the island’s shores in a matter of weeks.

The anticipated training exercise also seeks to develop techniques and procedures to combat unfamiliar threats to Barbados, such as the use of Improvised Explosive Devices, threats to key government infrastructure and kidnapping, to name a few.

Exercise TRADEWINDS is the largest regional multiagency, multinational security and disaster management exercise held in the Caribbean, in partnership with the United States of America.

This year’s Exercise is a Barbados Government approved, Chairman of the Joint Chief of staff-directed, US Southern Command sponsored, annual exercise. It is designed to improve co-operation and interoperability of partner nations in responding to the broad spectrum of Caribbean threats.

Speaking at yesterday’s launch of Exercise TRADEWINDS at the Barbados Defence Force, St Ann’s Fort, Garrison, St. Michael, Host Nation Co-Director for Phase one of the project, Major Carlos Lovell, said the purpose of the Exercise is to assemble a multinational CARICOM Task Force under the aegis of the Caribbean Basin Security Initiative, to exercise, and to evaluate, regional response to significant Transnational Organised Criminal activity, and the effects of a sudden impact hazards.

“Some members of the public may question the need for this Exercise to be held in Barbados at this time. I wish to remind those persons that Exercise TRADEWINDS will not only serve to further strengthen our relations with our regional and international partners, but, it will also allow us the opportunity to strengthen the skills and capabilities of the local military, law enforcement and disaster response agencies, as they endeavour to deliver the highest quality to the people of Barbados,” he said.

This year’s exercise will officially begin in Barbados on Tuesday, June 6, and end on Saturday, June 17, in Trinidad and Tobago. Exercise TRADEWINDS participation will involve personnel from 21 different countries, including the membership of the Regional Security System, CARICOM and countries external to the region, such as Canada, France, the United Kingdom and the Kingdom of the Netherlands.

Major Lovell said the CARICOM Task Force is the name given to the multinational force which will assemble in Barbados, and will comprise participants from across the region, with support from international partners.

He explained that while some of these countries will be directly participating in the Exercise, others will be providing assistance with training, committing significant resources to the event and the sponsorship. Approximately 800 soldiers, sailors, police and disaster management practitioners will arrive on our shores to participate in Exercise TRADEWINDS.

He said they will arrive with aircraft, maritime vessels and resources which have not been utilised in Barbados since the last large scale exercise deployment in 2003.

“Based on the nature of this years’ Exercise, there is much scope for participation from the general public, especially in the Disaster Management phase. I encourage all Barbadians to volunteer their services as role players for the Exercise, as it offers an opportunity for our citizens to deepen their understanding of the National Emergency Management System and to appreciate the capabilities of our local disaster management practitioners,” he said, noting that the volunteers who are required to sign up will also be thoroughly screened before being approved.

The Host Nation Co-Director also informed that as in previous exercises, a realistic scenario, based on real world threats, will be conduit through which the participants will attempt to achieve the training objectives.

Major Lovell said the exercise scenario will attempt to achieve the exercise participants in three operational domains, namely land, air and sea, with special overarching emphasis on interagency co-operation. The scenario this year will be based on the familiar threats of Transnational Organised Crime, Terrorism and Natural Hazards causing national and regional crises. (AH)