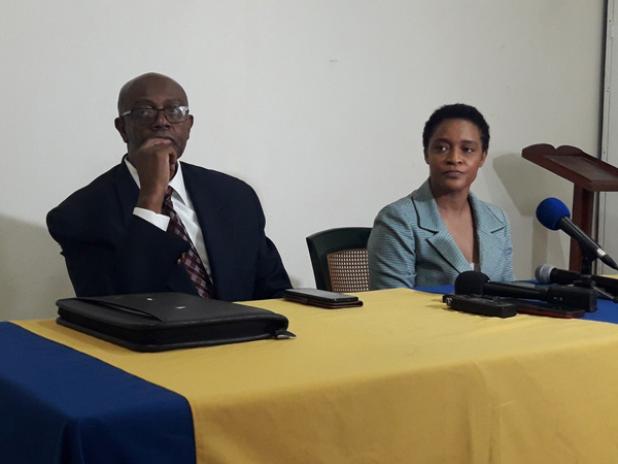 All Eyes on Inniss

The Executive of the Democratic Labour Party (DLP) is closely monitoring the trial of member and former Barbados Government minister, Donville Inniss, who has pleaded not guilty to money laundering charges.

That’s according to President Verla De Peiza, when asked about the trial of the 53-year old former Minister of Industry and Commerce, which entered day two in the Eastern District Federal Court in New York, yesterday.

Speaking to members of the media at the DLP’s George Street Headquarters, she said, “From what I have read the evidence in chief has been led, but as far as I am aware there has been no cross-examination as yet. So, we don’t know at this stage fully what would be the true extent of the testimony that has been before the court so far.”

“We have a practice of just reporting on matters as they unfold for this very reason because things can change, and we also do not comment on matters that are sub judice for the very reason because we are only hearing one side at this point in time, but just like the rest of Barbados we are following it very closely.”

In addition, De Peiza reiterated that the Democratic Labour Party does not endorse fraud, abuse of power, or the breaking of the law in any form or fashion.

“What we have always said from the beginning is like everyone else, we eschew any shade of fraud, of disrespecting our electoral system, of abuse of power. So, like everyone else, we are watching and waiting. I can’t call the matter one way or the other at this stage. First of all, I don’t know much about United States law, but what I do know about Barbadian law suggests that we need to hear both sides.”

“Every case looks good when you hear the prosecution’s side, and you really cannot make a determination on where a case is going to go, unless you hear both sides. We have not heard both sides,” he stated, further pointing out that if Inniss’ matter were to be tried on Barbadian law, it would have ended by now.

“Because there is no case against him based on Barbadian law,” Mayers explained. “I cannot speak with authority on what is happening in the United States of America, so I will wait until a decision is made before I can speak further on that.”(TL)