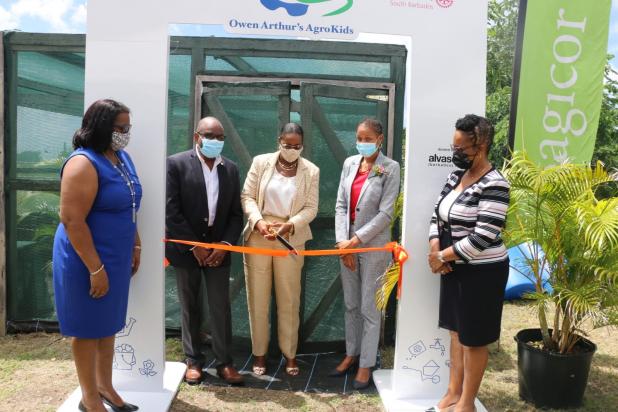 The Rotary and Rotaract Clubs of Barbados South have embarked on a project aimed at introducing children to backyard farming to teach them about proper nutrition.

The pilot, which was officially launched yesterday on World Food Day, will see students of George Lamming, Arthur Smith, Hillaby Turners Hall, and West Terrace Primary Schools test their green thumb through the Owen Arthur Agrokids Initiative. The Rotary Club has chosen to honour the late Prime Minister, Professor The Rt. Hon. Owen S. Arthur and his agricultural legacy through this project, and as such have chosen to name the project after him.

“By using this hands-on method, we hope to educate children about healthy dietary habits and exercise; strengthen and sustain the country’s food security; and by our involvement we will mentor children to help them achieve their full potential,” it was stated.

She went on to explain that the initiative is about examining how the food gardening environment impacts on the dietary behaviours of children in Primary Schools. In addition, on completion it is hoped that recommendations can be made to the Ministry of Health and Wellness and the Ministry of Education, Technical & Vocational Training to help form policy to create a healthier food environment for children and by extension all of Barbados.

“We want to increase the interest of the children in protecting the environment, in organic farming, watching plants grow to produce food to eat. By getting the students involved it can help them to see farming as being more exciting, sparking an educational interest where before there was none, especially for those students who learn better by using their hands. It can also prepare them for the future world of work by giving them that entrepreneurial drive or create an interest in them in a career in agriculture or environmental studies,” it was further pointed out.

Clarke also took the opportunity to thank the Barbados Defence Force (BDF) for assisting the Rotary and Rotaract Clubs of Barbados South in getting the gardens back into active production, some of which were in need of major work after being unattended during the months the students were away from school due to the COVID-19 pandemic.

Widow of the late Professor Arthur, Julie Arthur commended Rotary on the initiative, which she revealed was being launched on the eve of his birthday. She said that to truly know her husband was to know of his love not only for country, but for his family and his passion for gardening.

“That is why his family wishes to thank the Rotary and Rotaract Clubs of Barbados South for creating this admirable and practical project which will bear his name,” she expressed.

“Owen’s love for plants was demonstrated by his constant and determined fight to keep one special plant alive – the one that belonged to his late mother. In Owen’s eyes, keeping her plant alive, kept him with her,” it was revealed.

“Despite his hectic schedule as Prime Minister and later as Professor of Practice at The University of the West Indies, he found time to spend with his family and enjoyed the simple things in life… And we in the Owen Arthur family stand ready to work with you to ensure that this initiative is a success. I assure you that this venture would have made Owen very proud,” she said.

She told the gathering that the former Prime Minister understood the importance of agriculture.

“He understood it not only against the background of what was important in Barbados, but he also understood it against the context of CARICOM. He understood that if we were able to get back to our roots and use new technologies to be able to build out our agricultural sector, that we would be also creating a generation that could be very sustainable in terms of food production in this country as well. And that in turn we would be able to export products overseas in particular to the region.”

Minister Bradshaw also agreed with Mrs. Arthur that the initiative is a fitting tribute.

“I am pleased that Lady Arthur has agreed to allow the Rotary Club to use his name… He would not want his name to be associated with any and everything, but I do feel this is a project that would have been very near and dear to his heart,” it was stated.

“And one certainly that within the Ministry of Education we totally support not just from the Rotary’s end, but in terms also of the preservation of his name as well, and to ensure that this project is sustained,” she assured. (TL)