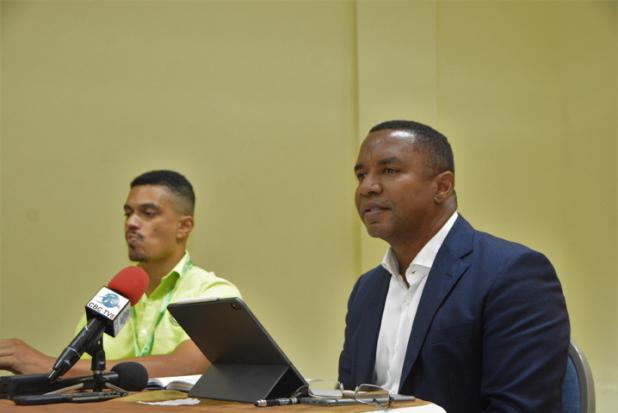 Abrahams: Barbadians must not be complacent

The Government of Barbados has left no stone unturned as Tropical Storm Gonzalo can still develop into a hurricane by weekend.

“We have had a full examination and discussion on the state of preparedness of Barbados for Hurricane Gonzalo. The agencies we met with included the MET office, Ministry of Transport and Works, Barbados Water Authority, Ministry of Health, Ministry of Education, Queen Elizabeth Hospital, Barbados Light and Power, Ministry of Agriculture, Fisheries, Bridgetown Port, Flow and Digicel,” he highlighted during a press briefing at the Lloyd Erskine Sandiford Centre (LESC).

“In general, all of the ministries, departments or agencies that have a part to play in disaster management. And the reason this meeting was held was to examine our state of preparedness for the system and to fine tune any preparations; to make any last-minute adjustments to our plan,” he pointed out.

The Minister said that over the last two years government spent a considerable amount of money in infrastructure; in equipment and in developing this country’s overall preparedness.

He reported that with respect to drainage, within the last two years, over $10 million has been injected into public works for purchasing equipment. He said that there are about 50 major water courses in Barbados, 49 of them have been cleared, with the last one currently being cleared.

As it relates to transport, he assured that arrangements have been made for the transportation of vulnerable persons to shelters, or medical facilities. With respect to the BWA, he said that there are now 14 emergency generators installed, eight pre-ordered generators to be used at the pumping stations.

“The reason that is done, is that we decide whether or not to move the community tanks to prevent damage to them based on the category of storm flood. So for a category three, or above you would dismantle and move the tanks, because they can become dangerous there, but for less than a category three you fill the tanks and lock them, and depend on the weight to maintain the integrity of the tank and to keep it in place,” he explained.

Minister Abrahams stressed that it is critical that individuals and households now complete their own preparations.

“It’s better that you take the preparations now that you can, than for the storm to redevelop or change course and everybody be left scrambling after the fact. Any preparations you do now whether it’s in securing your house, whether it’s in stocking up on canned goods, whether it’s stocking up on water will not be in vain. These are things that you should be doing in any event, securing around your house during the hurricane season so I urge Barbadians. Let us not be complacent,” he urged.

Director (Ag) of the Barbados Meteorological Services, Sabu Best provided an update noting that Gonzalo is currently encountering a dry environment which is contributing to his weakening. However, despite this some strengthening is possible during the next couple of days and there is still a chance that Gonzalo could become a hurricane.

“Sustained storm force winds are likely to spread across Barbados from the morning of Saturday July 25, with a chance of increasing to hurricane force by Saturday afternoon, during which time sustained wind speeds of 70 to 80 miles per hour with higher gusts are likely to affect the island,” he explained.