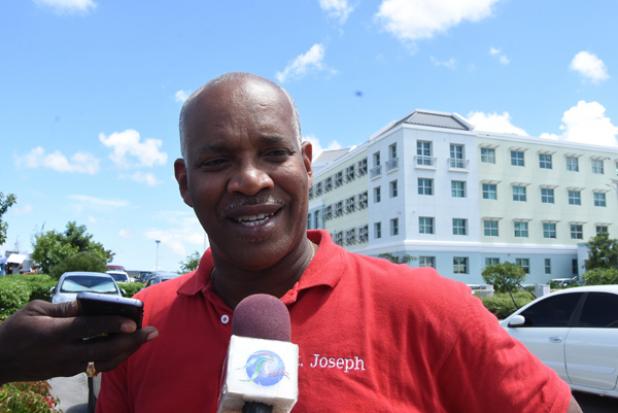 MP for St. Joseph, Dale Marshall speaking with the media. 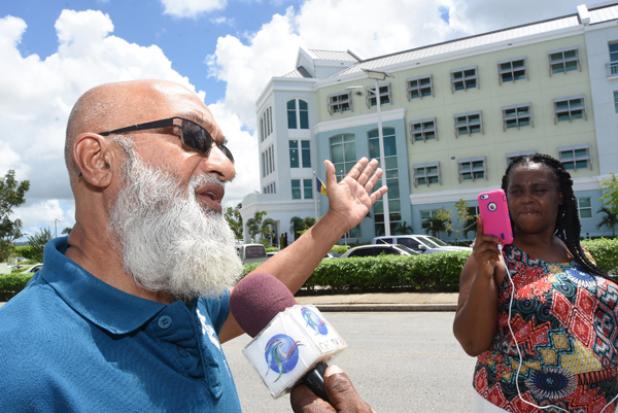 Mohammed Ali Kothdiwala too venting his
frustration on the behalf of the St. Joseph
residents. 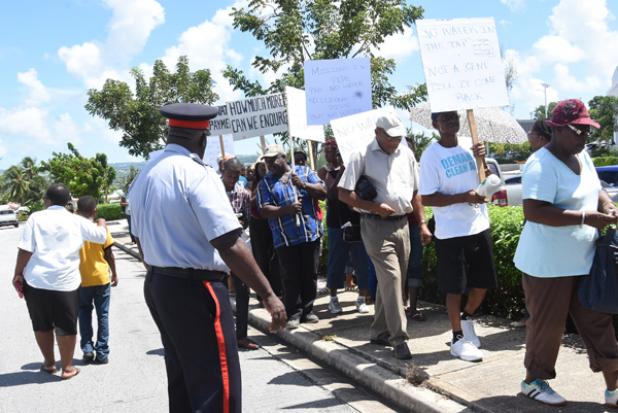 Thu, 09/08/2016 - 12:00am
By:
Peta Rowe-Forde
Residents of St. Joseph, also known as “Josephines” found themselves in front of the Barbados Water Authority; marching in the hope that their lack of water would soon become a thing of the past.
Led by Horse Hill resident, Andrew Dixon, the group peacefully moved back and forth the length of the parking lot, carrying placards and chanting to communicate their plight.
As residents voiced that they were unable to attend school and work, Dixon said, “We came here to vent our frustration and we came to shout, to let the world – not only Barbados – know how we have been treated over the last couple of months. Places like Bowling Alley ain’t had water for eight months; Suriname ain’t had water for almost a year; Horse Hill ain’t had water for almost six-seven weeks; and parts of Sugar Hill ain’t had water for at least six days! The water’s coming on for an hour and then going back off!”
The outage does not affect the entire parish but affected areas were given frequent visits with a water tanker. This seems to have come to an end according to Dixon.
“So we realise that the tanks were being filled and all of a sudden, Suriname ain’t had a tank in five days, Horse Hill ain’t had a tank – none of the tanks are full. So what we came here to do this morning is to demonstrate to the BWA that even though we are paying higher bills than any other citizens that have water, it is not right.”
Supporting the march was  Christ Church resident, Mohammed Ali Kothdiwala, who travels to the rural parish every weekend. He too, frustrated with the situation commented, “You think it is fair that people have to come and beg for water? The major thing that this country is missing is a Prime Minister. If you are a leader you would come out to at least hear what the people are saying because this is not suffering for two days.” He continued, “We bring in a conference talking about tourism, take these people in St. Joseph to the conference and let them see how the people up there are living. Even this issue with garbage collection, I live in Christ Church East and my garbage gets collected twice a week – probably because certain people live in the area.”
Therefore; strongly of the opinion that the country is under siege, Kothdiwala urged the Prime Minister to “come out and say something to the country because the people are crying”.
Joining residents on the march also were MP for St. Joseph, Dale Marshall; MP for St. Thomas, Cynthia Forde; as well as MP for St. George South, Dwight Sutherland.
Water Outages have been said to spread as far as these neighbouring constituencies.