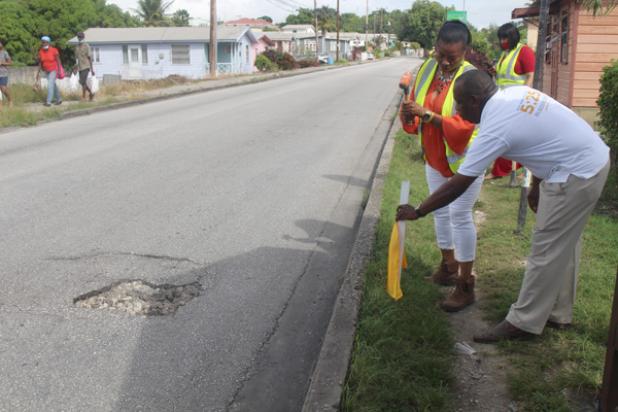 Members of the Barbados Road Safety Association placing a flag near a pothole along the road in Sargeant’s Village, Christ Church, to alert motorists and pedestrians to avoid it.

BRSA president calls for roads to be repaired

President of the Barbados Road Safety Association (BRSA), Sharmane Roland-Bowen, is not pleased with the state of some of this island’s roads and is calling on authorities to rectify the problem.

She said several roads island-wide have been deteriorating for months and this issue has been made worse by the heavy downpours that have been occurring. Though happy Government has acquired new equipment recently to patch potholes, she has encouraged members of the public to join the association in demanding that potholes and other road issues be addressed speedily.

“When you have bad roads leading to bad vehicles, they are two of the three components in road safety that causes accidents. We can no longer sit down and just accept what is being given us when it comes to our roads…”

She added, “As the travelling public [and] as the driving public of Barbados, we need to demand more because what happens is that our economy is getting more money than in its whole history when it comes to paying taxes for roads. Each and every person who travels on our roads pays road tax. Different from before, when people were evading and not paying, but now as long as you travel on the roads, you have to pay road tax in the fuel that you buy. There is also an added bonus where persons who cut their lawns... they need to purchase fuel for that. So tax is paid when you purchase the gasoline or diesel to work your weed whacker or your lawnmower.”

Roland-Bowen spoke to the media on Sunday ahead of World Road Safety Week, which runs from November 16 to 22. She was at the time along the stretch near the Price Lo Supermarket in Sargeant’s Village, Christ Church. There, members of the association placed a flag near a pothole to alert motorists and pedestrians of it.

She said the association will be placing flags near other potholes in Christ Church, St. Michael and St. John communities on the day. These are “to provide an early identification of these hazards, so that when persons come upon them, they already see them in advance so they can manoeuvre or slow down before they get into the pothole. We don’t want people having to swerve at the last minute and hit another vehicle or hit a pedestrian because of their late sighting of these potholes”.

Roland-Bowen further stated the initiative was previously done by the association some years ago and “it reaped results”. She said members of the public reported flagging of the potholes did help. (MG)