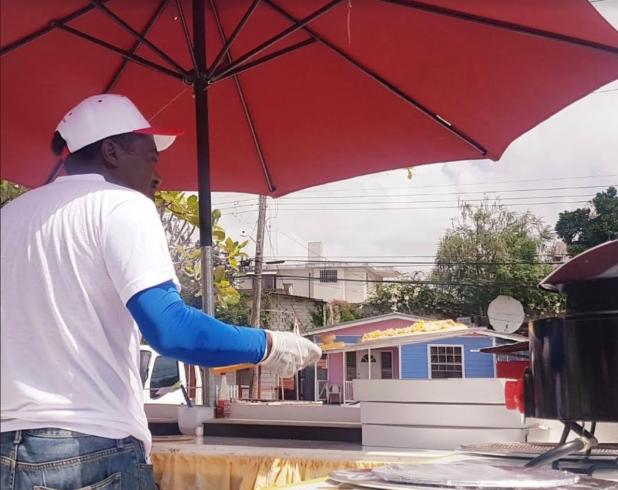 Co-owner of Pizza Bums, Michael Prescod places a pizza in the portable oven for a customer at Browne’s Beach. 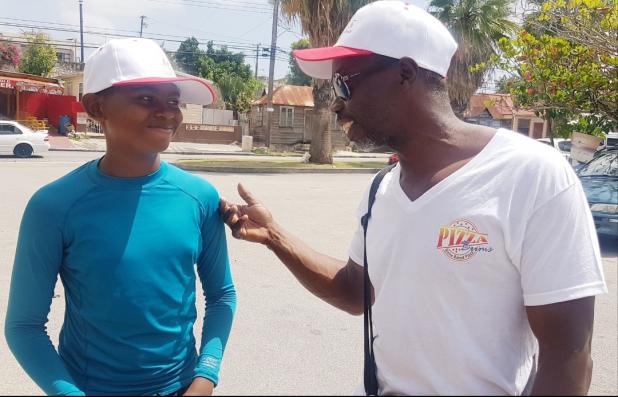 Entrepreneur and co-owner of Pizza Bums, Rodney Prescod gives assistant Gabriel Rampersaud some advice as he collects the pizza orders at Browne’s Beach on Sunday. Prescod collaborates with his colleague and co-owner, Michael Prescod (not in photo) to prepare the pizzas. For Rodney, this venture is just one of many as he plans to launch a healthy food brand and book in 2020.

Entrepreneur Rodney Prescod has an incredible story to tell about his recovery from a path of poor health to one of recovery.

He is currently the co-owner of the food business, Pizza Bums which specialises in stone-baked pizza. Yesterday, The Barbados Advocate spoke to Prescod who revealed that he is currently working on launching a healthy food product brand and he intends to publish a book on nutritious recipes.

Prescod said that in 2016, he was faced with high blood pressure, uncontrolled diabetes, high cholesterol and vitamin deficiencies. After this diagnosis, he decided to make significant changes to his diet, lifestyle and nutritional intake and his efforts paid off when he returned to the doctor. The physician congratulated on his improved medical results and encouraged him to write a book.

To reach this stage, Prescod said he had created a number of his own recipes. He has learned to create his own flour and ice-cream from whole foods. The business, Pizza Bums is in its second year and Prescod explained that he has unique toppings including smoked fish and ham and Blackbelly lamb. Also, he has plans to bring gluten-free pizza products using local items soon. He told The Barbados Advocate that he wanted people to see the Barbadian connection to his food.

Prescod is better known as the Principal of Windsor High School but he is preparing to launch his book, “Break Free” at the end of the year. He will illustrate unique food creations including how people can use quinoa to make sushi which is usually made with sticky rice. Prescod noted that his journey into the food industry was inspired by his family and his father who was a baker.

In addition to nutritious recipes, Prescod also revealed that he working on ways to make toffee from sweet potatoes and use monk fruit to sweeten diabetic jams. Prescod wants to dismiss the idea that people do not have the time to prepare their own healthy meals and noted that it only takes a few minutes to make their own food. He also suggested that people be selective about the foods that go on their plate. The businessman highlighted that through reading and research, he found that there are a lot of unusual ingredients in basic items like cheese and milk. Prescod stressed with people dealing with failing health, it was important to take control by managing the food that they eat. “In the long run, it is you who pay the price,” said Prescod.