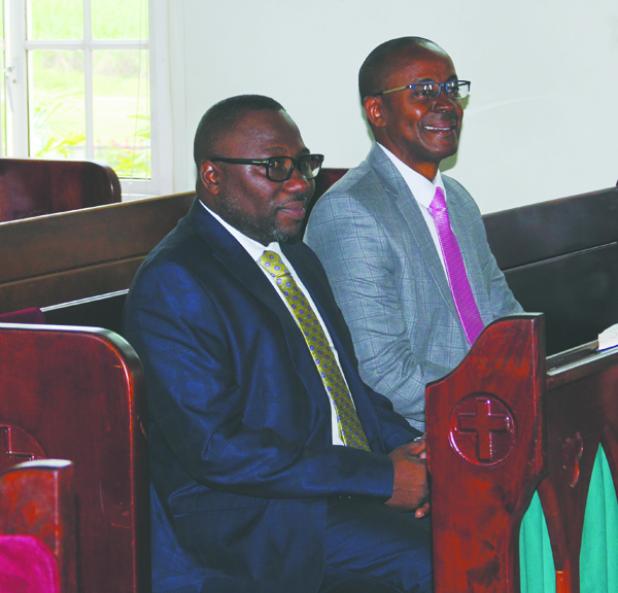 Minister of Small Business, Entrepreneurship and Commerce, Dwight Sutherland (left) and Ambassador Clyde Mascoll, Economic Counsellor to the Minister of Finance, Economic Affairs and Investment and Chairman of the Barbados Trust Fund Limited during yesterday’s service.

As many as 2700 businesses have benefited between the beginning of last November and the end of October this year, through the assistance of the Barbados Trust Fund Limited.

That’s according to Minister of Small Business, Entrepreneurship and Commerce, Dwight Sutherland, who said the staff of only nine persons should be commended for being able to disburse that quantity of loans within a period of just one year.

He was speaking yesterday during a service at the St. Luke’s Anglican Church, where staff and members of the board of the Barbados Trust Fund Limited joined the congregation to mark that entity’s first anniversary.

His comments came as he spoke of the rationale behind the creation of the Trust Fund Limited. Sutherland told the congregation that the entity was created because Government was cognisant of the need for novel approaches to economic growth and development. Adding that the Fund was born out a need to invest in the average man, he indicated that Government has invested some $50 million in the Fund, to be disbursed in $10 million tranches annually for five years.

“…One such approach was centred around investment in skills, ideas and the endeavours of Barbadians. The aim was to create wealth through the empowerment of people... and to create an entrepreneurial ethos in this country that is nationally pervasive, spread across the country, but driven by international foresight,” he said.

The Small Business and Commerce Minister added, “So whereas we want to build out our small businesses, we want to build them out with a view that they too can have their place, their rightful place in this global business environment. So that is why it is driven by international foresight, because even though there are 166 square miles that we occupy as a country, we should not limit ourselves and our opportunities to just that 166 square miles.”

He added that with the Fund now in place, people with ideas and who are keen to get started with business, but have traditionally had challenges with access to capital, can fulfil those dreams with the seed capital provided through the Unit.

“It is like a meeting turn concept, so we invest that $10 million and we offer you the opportunity to come and secure a loan of up to $5 000… The people within that sphere called the micro, small and medium entreprises sector, the small business people who have aspirations and dreams and ideas and skills, we have provided as a Government the opportunity for you to indeed start your business. It is not just a case of providing start-up capital of up to $5 000, but we give you the opportunity to even borrow more from the Trust Loan, but you have to be compliant, and when I say compliant – you have to pay back,” he stated.

Sutherland made the point while noting that the payments are quite manageable. He explained that for a loan of $5 000 at an interest rate of five per cent, persons would be required to pay as little as $157 per month. (JRT)