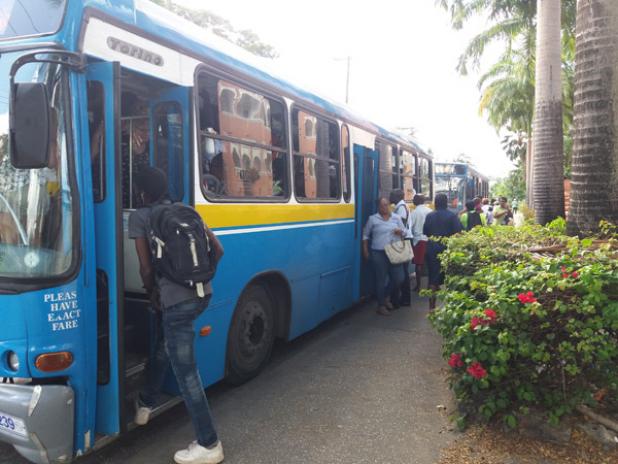 Starting today, the travelling public will be paying $3.50 a ride, up from the previous $2. However, some people are calling for the problems with the Transport Board bus service to be rectified before higher fares are introduced.

AS commuters begin paying higher bus fares from today, a Barbadian currently residing in Canada wants the authorities here to improve the services offered by the Transport Board.

Ms. Amelia Jackson made the appeal while commenting on the recent address the Prime Minister, Ms. Mia Amor Mottley, gave to Barbadians in Toronto.

Ms. Jackson, a retired nurse, said that the Transport Board was one of the topics the Prime Minister addressed and that she gave the audience the assurance that her administration is working on a plan to provide an improved bus service.

Ms. Jackson was giving her thoughts to Business Monday on the Prime Minister’s address which was well received by the several Barbadians who attended.
From today, the public will be paying $3.50 a ride, up from the previous $2. Government said that the increased fare is part of a plan to improve the finances of the state-owned bus company.

However, the announcement of the fare increase has been met with criticism, with some people suggesting that the problems with Transport Board should be fixed before higher bus fares are introduced.

“I hope that something will be done in that area,” Ms. Jackson said, while recounting that on a visit to Barbados she and colleagues had to wait on one occasion for two hours to get a bus from the terminal at Fairchild Street to their destination.

“We were told that a bus would have been coming at 1 p.m. and it never came until 3 p.m.,” Jackson recalled.

She pointed out that a reliable bus service is what is required because people have to get to work on time. “It therefore is not a good thing having to wait that length of time for a bus,” she noted.

She added that Ms. Mottley gave a good account of herself while addressing a broad range of issues and the programmes her government will be pursuing to mend the problems which Barbados is currently facing.

“This suggests to me that the Barbados Labour Party Government is going to be very active for the next four years,” she stated.