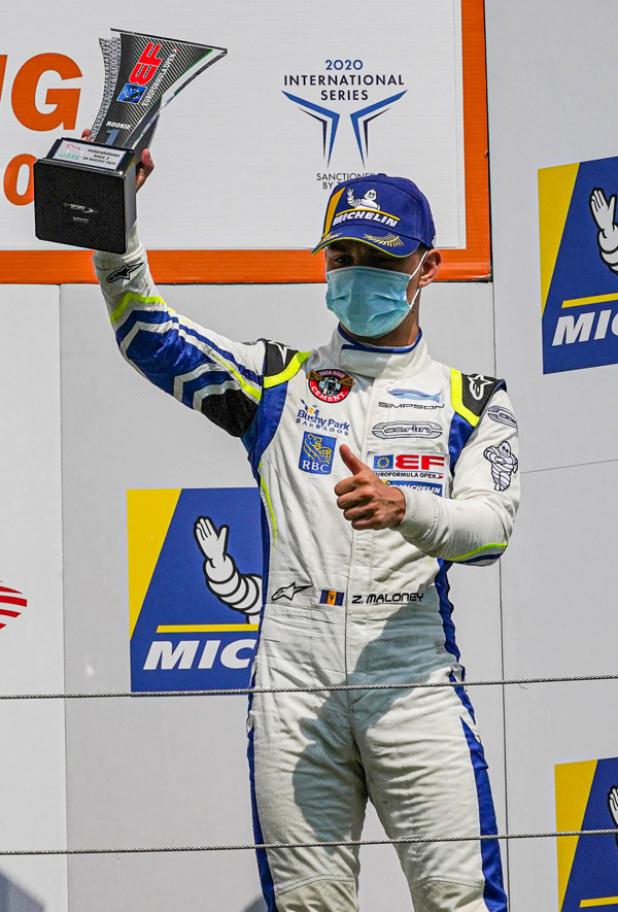 Barbados Zane Maloney has finally got his Euroformula Open Championships off and rolling and it was a good start to the opening two rounds at the Hungaroring Circuit.

The British F4 Champion and Barbados Sports personality of the year, Maloney, qualified fourth for the first race of the season, which was held on Saturday and it was there that he finished as well to pick up 12 points.

In the 17-lap race pole sitter Yifei Ye from China was the winner.

It was in the second round, which was held yesterday, that Maloney claimed his first podium as he finished third.

Starting fourth on the grid, Maloney immediately slipped back to sixth place at the start of the race as he did not enjoy a good start, but he immediately charged back on the outside and was left with no choice as he was forced wide.

When he rejoined the track, he was up into third place and it was his steady pace that kept him there.

Maloney opened a gap to his Carlin teammate Ido Cohen, who was running in fourth place. Each time Cohen closed the gap, Maloney responded by opening it once again.

He finished third to pick up 15 points and move ahead of Sebastian Estner on the overall table.

Estner was the Rookie who claimed third place in the first race but had to settle for fifth place this time around.

Maloney now sits third in the standings with a total of 27 points while Estner is fourth with 25 points and these two look set to be locked in the Rookie fight for the season.

Points leader is Yifei Ye from China, who claimed the extra points from the fastest lap of the race and the point for qualifying on pole in both races. These added on to his 25 points for the race victory gives him 54 points in total.

Second in the standings is Andrea Estner with two second place finishes and a total of 36 points.

The next two rounds are slated for France at the Paul Ricard circuit from August 20-23 before they move to the Red Bull Ring in Austria on September 12-13.