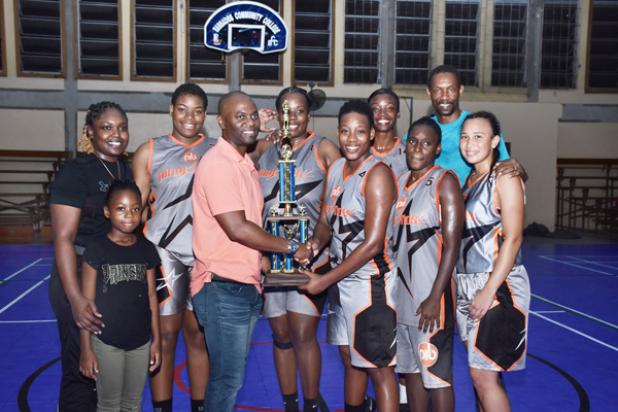 Yet another crown for the Pinelands queens

IT may have been a relatively dull season, but the end of the #1 Beauty Supplies and Exchange Women’s competition got hyped with excitement as Preferred Insurance Brokers Pinelands rose yet again to the basketball throne after they closed out the finals series 2-1 against the Combined Schools Lady Tridents with a 57-48 Game 3 victory.

Pinelands have dominated women’s basketball for the last 4 years, winning the league in 3 out of the last 4 years. With many experienced and former national players including Tamisha Flatts, Sadé Clarke, Maria Cumberbatch and Shakira Shorey on the team, it was no surprise that the veterans held off the charging youth led by Zahra Ashby and Rebecca Simpson.

Sadé Clarke spoke to the media and when asked about having any doubts about Pinelands taking the title, after losing Game 2, her answer was firm.

“Of course not. We basically gave away the last game, allowing them to gain too much confidence and momentum in the third quarter. So we had to fight to bring back down the lead and we are not as young as we used to be and after awhile the legs got tired.”

She went on to expand further on the strategy coming into the deciding game.

“We realised that after pressuring in the last quarter, we forced them to cough up the ball a lot, so we tried to maintain pressure whether half court or full court and keep a hand in Rebecca’s (Simpson) face at all times, but with the dead legs you still slip up sometimes.”

Pinelands have powerful players in Shakira Shorey, Kashera Corbin and Latifah Wood in the paint while Combined Schools struggled to have a consistent force in the middle. Pinelands ensured to utilise that advantage and pounded the ball inside.

“That was the plan from Game 1, but it was how well we executed the plan because they do not really have an inside presence. We have Latifah, Kashera and Shakira and myself as well where I posted up sometimes, but the guards did not get the ball inside as well as we wanted to.”

Despite the strategy not working early in the game, Pinelands figured it out in the second half. The first two periods were low scoring with the scoreline at the half-time break reading 25-19 to Pinelands. Antonia Baptiste, Flatts and Cumberbatch made well-timed passes to the cutting Wood and also the posting Shorey and Corbin for easy baskets against the smaller Tridents players. Granted they were not able to score each time, but they also drew fouls against the frustrated defence in the last two periods.

Shorey had 8 of her 12-point game tally in the final 12 minutes of the matchup, but Tridents still had hope they could crawl back into the game from down 46-34 with 8 minutes left to play. In fact when the clock read 2:02 remaining, they had brought it down to a 52-47 deficit in the fourth and just needed a shot to drop to close the gap. It was not to be however and shots continued to rim out and roll off the hoop, just as it did early in the game for the school girls.

Defensively, Tridents still were putting their all on court, but the writing was on the wall with the long-range bomb from Flatts with seconds remaining. That three was enough to deflate the youngsters for good. Hugs were shared by Pinelands at pulling together for another year to be crowned 2019 Queens of the Barbados Amateur Basketball Association.

Captain Flatts topped the scoring with a double-double for Pinelands with 13 points and 10 rebounds along with 6 steals with Maria “Flowers” Cumberbatch scoring 11 points and 5 steals. In the paint, Shorey scored 12 points and grabbed 6 rebounds and Wood almost completed a double-double with 8 points and a mammoth 14 rebounds. For the Tridents, the talented Zahra Ashby had a game-high 17 points and 9 rebounds and Simpson finished with 11 and 7. Jada Smith battled in the paint for 13 rebounds, but was not as hot from the field, scoring 7 points from 3 of 12. (AS)