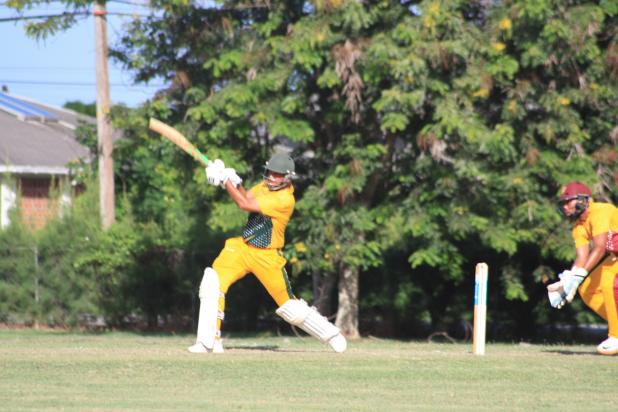 Windward captain Sean Thornton, hitting one of his 11 boundaries on the day. Photo credit Ed Clarke.

Windward’s intermediate team hosted long-time rivals Wanderers Cricket Club on Saturday, to score the winning runs on the last ball of the running with a scampered single under sunny skies. Losing the toss, Sean Thornton and the Lucas Street lads were put into field first, and were quick to claim the first wicket when Ronnico Ross was run out on the fifth ball of a tight opening over by Jewaun Cumberbatch having only allowed 2 runs.

Vice Captain Shae Branch bowled the second over, giving up just 6 runs and holding the visitors to a total of 8 for 1, when the ball was returned to Cumberbatch who was punished by the pair of Jared Lovell and Kyle Hinkson who made 13 runs in the over, carrying the score to 21 in just 3 overs. Branch continued his tight bowling, giving up 5 runs in his second over, and just 2 in his third turn with the ball, ending the day with a bowling economy rate of 4.33, the best of the Windward bowlers on the day.

The pair of Lovell and Hinkson continued to dominate the bowling, carrying the score to 80 when Lovell was declared LBW in the 14th over having made 47 runs from 50 balls, bringing Darren Cuffy to the crease. Seven minutes later, Hinkson retired hurt, having made 32 runs from the 37 balls he faced, and was replaced by Richard Perkins. Cuffy decimated the Windward bowling, making 41 from 23 balls in 25 minutes. Wanderers ended their innings on 136, Cuffy and Perkins not out.

Opening the batting for the green and gold were the pair of Joshua Walker and Alan Branch, both of whom got off to a rocky start, Branch being dismissed leg before wicket on the third ball he faced having 2 runs to his credit, while Walker was dismissed in the third over, also having made two 2 runs. Thornton replaced Branch at the crease, and quickly opened his account, hitting a four – one of eight he would make on the day – followed by a six a few balls later, he would hit two more sixes before the innings ended. He was joined by Shae Branch at centre, and the pair set about chipping away at the score, taking it to 64 when Branch was caught by Cuffy having made 16 runs from 15 balls bringing Ronaldo Callender to the wicket. Callender and Thornton added a further 44 runs to the board when Callender was run out having made

New comer Elon Davis took his guard and quickly set about with the task at hand, hitting a four and getting a quick double, before being bowled by Cuffy in the 17th over, the score now 115 for 5. Thornton was then joined by Ken Mason, who has returned to the green and gold after missing a year. Mason was returned to the clubhouse having added one run from the two balls he faced, with the score having advanced to 118/6 with under three overs remaining and 19 runs needed to win. Replacing Mason was Chris St. Hill who faced 2 balls, making a single before losing his wicket, but helped Thornton carry the score to 129 with 6 balls remaining. Sean Merritt replaced St. Hill, and with Thornton, the pair added 6 runs to the scoreboard before Merritt was dismissed LBW. The score now 135/8 with 2 balls remaining, and Liam Luke joining Thornton. Luke hit a quick single, putting Thornton on strike with the score tied on the final ball of the match. Thornton hit the last ball, with Luke already half way down the pitch, and took off for the southern wickets, diving into the crease just ahead of the run out attempt, winning the match by one run, with a score of 92 not out from 68 balls. A true captain’s knock for sure, and earning his team mates vote of Man-of-the-match.

The Intermediate will travel to Richmond Gap, St. Michael to face