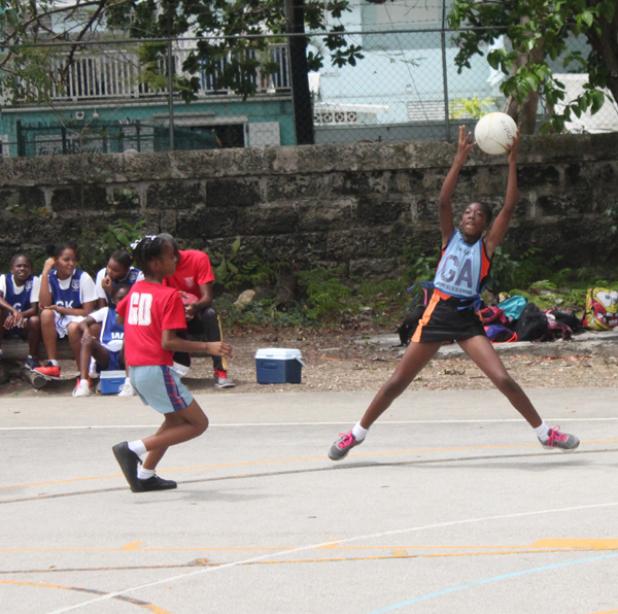 Wilkie well on their way in Pine Hill tourney

Thu, 05/26/2016 - 12:00am
By:
Michael Phillips
Wilkie Cumberbatch is definitely on track to finish in the top of the ranks in the Marion Johnson-Hurley/Carolyn Sinckler Zone of the Pine Hill National Sports Council Primary Schools’ Netball Competition. Playing on Monday at the Police Boys and Girls Sports Club, they picked up the two biggest wins on the day when they beat St. Ambrose and
St. Gabriel’s.
St. Ambrose were first to go down and the final score was 7-1 after they trailed 5-1 at half-time. Their only goal came as Goal Attack Rakera Williams netted her only attempt. For Wilkie, Dessani Waithe shot six of seven at Goal Attack, while Kennia Blackman pitched in the other goal from four shots. The St. Gabriel’s game saw the losers not getting a single shot. With Wilkie leading 3-0 and 5-0 at the end of the halves, Waithe was good for two of four shots, while Blackman nailed three of five.
Vauxhall Primary were also double winners as they came up against Luther Thorne and Grantley Prescod. When they faced Luther Thorne, all of the points in the 4-0 result came in the first half. Goal Attack Nyesha Harewood scored two of her four shots and Goal Shoot Makayla Lynch hit 100% of hers for the other two points. The Grantley Prescod game was a much closer affair as the St. Barnabas side finished within a point of Vauxhall in both halves. The score was 1-0 at the break and a perfect three from three, compliments Hayleigh Haynes, brought Grantley Prescod up to the 4-3 final score. Harewood scored four from eight for Vauxhall.
Prior to losing to Wilkie Cumberbatch, St. Gabriel’s were in high spirits due to a slim win over St. Lawrence Primary. The sides were tied at two goals apiece at half-time, but a single goal in the second half tipped the scales in St. Gabriel’s favour. Shonyaha Greenidge shot 100% for St. Lawrence’s two goals, while Shannon Vaughn (1) and Kenya Belle (2) were also flawless for St. Gabriel’s.
Bay Primary had two games on the day and after breaking even with St. Ambrose in a goalless draw, they went on to beat St. Angela’s seven goals to two. Goal Attack Noa Harper scored both goals for St. Angela’s from four shots, netting one in each half. Her counterpart on the other side, Keviana Holder scored six of nine. The other goal came from Kevisha Holder, who took two shots.
Over at Bridgefield in the Angela Gibbs/Anna Shepherd Zone, Holy Innocents Primary dominated as they took a whopping 13-0 victory over St. Elizabeth Primary. Not allowing their opponents any shots at all, the winners stormed their way to the finish with Jalicia White scoring eight of 12 at Goal Shoot, while Derique Bellingy was good for five from eight.
Good Shepherd Primary pulled away from Welches in the second half of their encounter to go from 3-2 to a win at 8-2. Shadea Grazettes was perfect with two from two at Goal Attack, but that was all she could get her hands on. The action was at the other end and Asheka Broomes scored two from four at Goal Attack, while Shakacia Watson did most of the work from under the pole with six from 14 shots. Welches were held to a second loss when St. Stephen’s Primary pulled out a 4-1 win. St. Stephen’s had scored all of their goals by the first half and Jada Worrell scored two of three at Goal Attack, while her partner Anisha Smith shot the other two from four shots. Shadea Grazettes added Welches’ consolation from a single shot in the second half.
West Terrace were 6-0 winners over Hillaby Turner’s Hall in the other game at the venue. Hillaby’s shooters did not get a single shot as they trailed 2-0 and 6-0 at the halves. Goal Attack Anise Alleyne took three shots but only hit one. Chantel Pinder was a bit more settled at Goal Shoot and knocked down all five of her attempts.