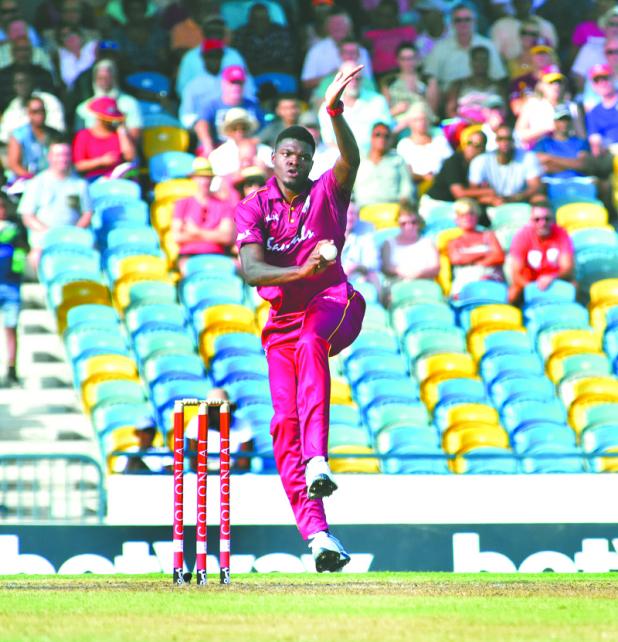 Alzarri Joseph carried off the man of the match award once again for his impressive performance with the ball.

IT was a game that everyone felt the West Indies should have won easily to secure the three-match Colonial Insurance ODI Series against Ireland before the teams moved on to Grenada for third and final match.

Instead it was an edge of the seat thriller which went down to the wire and the last wicket before a boundary over extra cover finally gave the West Indies the one wicket victory.

Ireland won the toss and once again decided to bat. The West Indies bowled well and restricted Ireland to 237 which was supposed to be an easy target to reached. The West Indies had two forced changes with Roston Chase and Keemo Paul out and being replaced by Romario Shepherd and Khary Pierre, Chase reported some chest pains, while Paul reported lower back pain.

It was the tail enders who took the West Indies to victory with Hayden Walsh Jr. leading the charge along with Khary Pierre and Alzarrie Joseph.

The steady fall of wickets meant what was supposed to be a canter to the series winning victory turned into a desperate attempt to save the match and an nail biting contest to the wire.

The early wickets of Evin Lewis, Shimron Hetmyer and Brandon King left the West Indies fighting to recover with the score on 24/3.

However after a brief period of rebuilding where Shai Hope and Nicholas Pooran added 52 runs they lost opener Hope in the 19th over.

The captain Keiron Pollard came and was striking the ball far into the stands, forcing a ball change in consecutive deliveries that he dispatched on top of the roof of the 3Ws stand and this looked like the partnership that would take the West Indies to the target.

However, a 16-minute rain stoppage broke their stride and immediately on the resumption Pooran was bowled Simi Singh for 52 runs off 44 balls to end the partnership with the first ball of the 27th over between him and Pollard which was worth 64 runs.

Pollard went soon afterwards giving Barry McCarthy a return catch from a simple defensive prod. Pollard went for 40 runs off 32 balls.
The West Indies moved from 140/4 at the rain break to 148/7 in three overs before another rain stoppage came.

This one was shorter than the first one and the West Indies did not lose any more wickets in the three overs bowled afterwards Kharry Pierre and Hayden Walsh Jr added 52 runs before Pierre guided a ball into first slip hands and the West Indies were 200/8.

With six overs left West Indies were 220/8 and Joseph struck two boundaries back down the ground before he was out foxed by a slow bouncer which he played into the hands of midwicket.

One wicket left and six runs to go.

The last over was full of drama and excitement the third umpire took almost five minutes to rule on a run out decision which would have given the visitors the last wicket and the victory. Cottrell desperate attempt to squeeze a single was finally given not out with three balls to go and the West Indies needing three to win.

Then another run out chance came as Cottrell was trying to give Walsh the strike by scampering for a second run but was sent back from more the three quarters way down the pitch. He slipped, recovered and never gave up to make his ground.

Then Cottrell sealed it with a boundary over extra cover to give the West Indies the victory in the final over.

Ireland once again had a good start with opening batsman Paul Sterlin leading from the front. However after reaching 110/2 many though that the pitch was good enough for a score closer to 300. Instead Ireland only managed 237 off their 50 overs.

Sterlin went on to finish on 63 runs before he was bowled by Alzarri Joseph whose first ball rocked the stumps of Andy Balbine thanks to the extra pace.

Sterlin looked to be attempting the steer the ball down to third man, but out succeeded in playing it onto his stumps.

Joseph who bowled a fuller length yesterday mentioned that he assesses the pitch as the game goes on and employed different strategy with a fuller length this time around is happy to be doing the job for his team.

He said the pitch isn’t slow but more even than that of the first game as he was able to return in the middle and pick up wickets.
However the total turned out to be challenging.