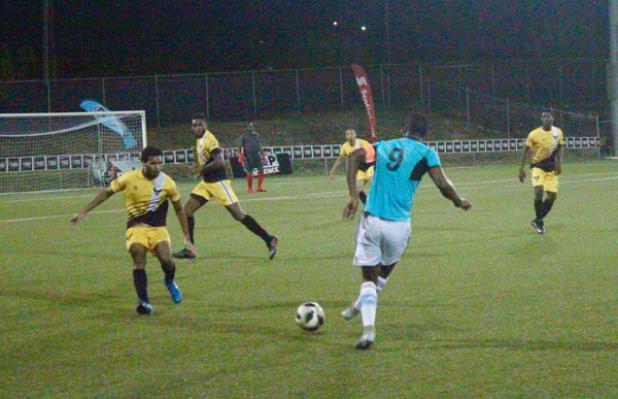 Porey Spring are having a tough time in their debut year as they are still yet to win a game. 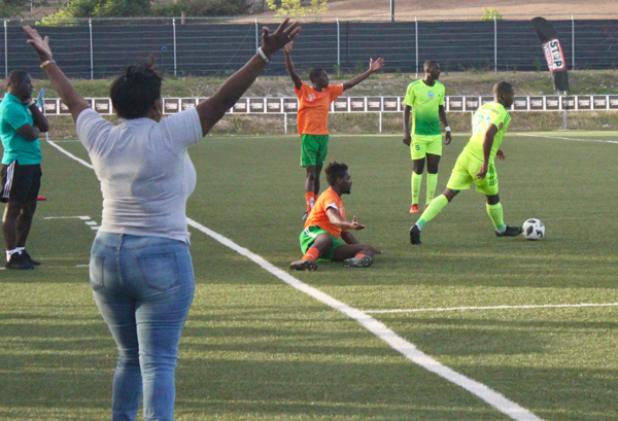 The Compton players and management appealing a play during the evening’s first game against the Barbados Defence Force Sports Programme.

It was a brace from former national player Arantees Lawrence that paved the way for defending cham-pions Weymouth Wales as they rolled to yet another win in the Barbados Football Association’s Premier League. Playing on Sunday evening at the Wildey Turf, Wales ran amok as they put six hot ones past Claytons Kola Tonic Notre Dame.

Another former national player in Rashida Williams got the show started in the 17th minute when he sent a corner kick at the near post that sailed past the head of Azarel Croney and goalkeeper Ron Pile. Lawrence got his name on the card in the 35th after he ran straight through the middle of the defence to meet a cross from the right by Stephan Cumberbatch.

A third goal came from veteran Riverre Williams in the 41st after Romario Harewood made a run on the left flank before sending the ball over to the right to meet up with captain Hadan Holligan, but Williams was making his way through the middle and Holligan’s first touch sent the ball back to the left to meet Williams.

Before the half ended, a defensive blunder saw the ball being stripped from the Notre Dame offence and sent back into the Wales final third. Lawrence got away on the left and the ball was taken off him, but only made it as far as Harewood on the right, who advanced and squared it back to the left to Lawrence, who easily slotted the ball past Pile in the 45th.

Going the other way, Holligan rocked the nets in the 77th after he was fed a through-ball by former national player Kemar Headley. Left alone to face Pile, Holligan, who is rather experienced despite his young age, made no mistakes with the opportunity and pushed the ball to Pile’s right at the far post.

With the game on its last legs, Headley took the score to 6-0 when he buried the ball in the back of the nets in the 91st. Harewood took a corner kick from right and the ball came off the defender’s head to go over to the left. However, Headley was all alone inside the 18 and he sent a powerful right-booted home to seal the deal for Wales.

The nightcap game went to the University of the West Indies Blackbirds and Mark’s Auto Spares Porey Spring; and the latter were held to their sixth loss this season. Struggling to find points in their debut year as they are yet to win a single game in the league after an impressive pre-season romp, the new kids conceded three unanswered goals to the Blackbirds.

Former national captain Mario Harte got the ball rolling in the 9th minute as he was in the right place at the right time to head home a left flank cross from Alvin Chapman. The score remained the same well into
the second half until Jamario Worrell put away a lovely free kick from the right that dropped just under the cross bar to see UWI to two in the 61st.

Harte was not satisfied with just one goal and drove the final nail in the coffin with what was undoubtedly one of the best goals of the season. Chapman threw the ball in to Harte, who was in the box with a man on his back and a second advancing. With one cheeky touch to put the ball over the head of the incoming defender, Harte put the ball over his left shoulder with a scorching volley that left the Porey Spring keeper dumbfounded and his feet remained rooted.

The evening’s opening game was a surprise goalless draw between Zone 2 leaders Barbados Defence Force Sports Programme and Home Improvement Hardware Compton, who are currently courting relegation. Being held to their first draw of the competition, the soldiers were denied several goals by eventual Player of the Match Oba Tucker as he was on fire on the evening.