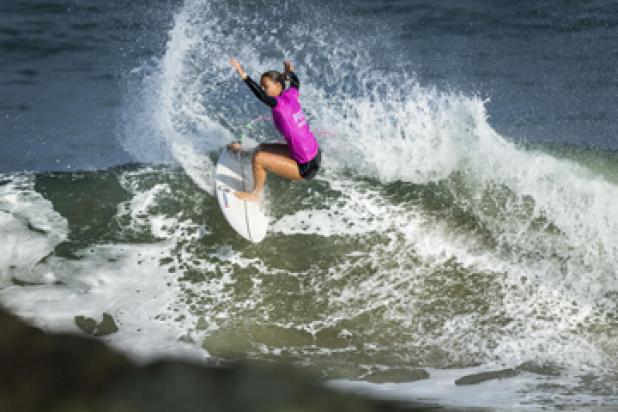 Barbados’ top international female surfer, Chelsea Tuach, took third over the weekend at the WSL 1500 Anglet Surf Pro. In an event that featured 56 top international surfers, Tuach was able to progress though the rounds with her speed, power and flow in the tricky beach conditions on offer.

She was able to get the better of French veteran surfer, Cannelle Bulard, in their quarter-final match-up on Sunday thus turning the tables on the surfer who edged her out of a semi-final berth the week before at the Lacanau Pro.

Tuach then faced local French surfer and event favourite, Pauline Ado, in the semi-final and although she put up a valiant fight with two waves in the good range – a 7.00 and a 6.13 , Ado was able to find the better waves to take the win.

“These have been two good weeks for me competing in France and making it to finals day at both the Lacanau and the Anglet Pro. I am feeling confident in my boards and my surfing at the moment and hope to be able to keep the momentum going into next week’s WSL 6000 in Pantin, Galicia,” Tuach said after the event in Anglet.
The Pantin Pro Classic is an event that Tuach won in 2015, becoming the first Barbadian surfer to win a major WSL 6000 pro event. Last year she also had a good run, ending in the top ten out of the 108 surfers who participated.

“I love competing in Spain. It has very special memories for me and I definitely hope to bring my best to the event and make a good run,” Tuach said.

With the points she earned in France, Tuach climbed one spot, to 16 in the world on the WSL International Qualifying Series rankings. She is ranked number two on the WSL regional North American rankings.