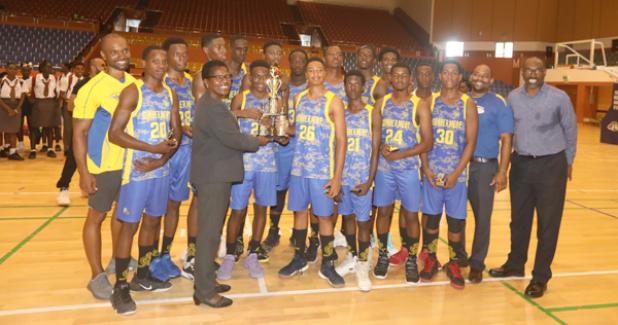 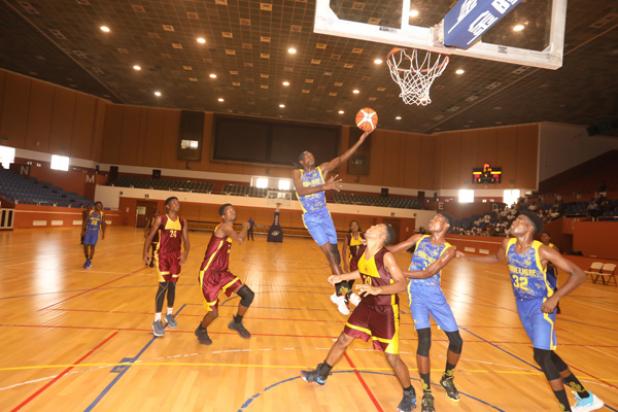 Soaring to the ring, Finals MVP Primus Walrond of Combermere scores 2 of his 21 points.

IT was a battle on the court as well as the stands but the Combermere School made the final run of the game, courtesy of Finals MVP Primus Walrond, to lift a third crown in three years in the National Sports Council Schools’ U19 Senior Basketball competition on Thursday afternoon.

Walrond led his team with 10 points in the fourth quarter on his way to 21 points to stop the charge of Harrison College, defeating the boys in maroon and gold 98-89 to earn the coveted crown. Playing at the Garfield Sobers Sports Complex, the two teams fought hard, but it was Combermere who made the first move. Fiery guard Brandon Ruck and the silky Justin Bramao attacked the paint at will, giving HC a warm baptism into what was to come. Ruck made strong moves to the basket while it seemed like Bramao weaved his magic over the defence, finishing smoothly at the ring. The two put up a combined 17 points in the first quarter to push Combermere ahead 21-13.

The Combermere fans in the stands were losing their minds, celebrating the early lead but HC had their own duo at the top and Chikosi Boardi and Simeon Maynard silenced the Combermere throng while exciting their own supporters behind their bench. Boardi started the push with an effortless three-pointer to start the quarter and piled on 15 points in the period while Maynard danced his way through the Combermere key for 9 points. It was a run that was fuelled by defence and steals and would see Kolij take the lead for the first time in the contest and maintain the advantage to the half-time break, up 44-48.

Now Combermere had a towering five-pack of 6’4 forwards including Bramao, Walrond, Saadiq Browne, Tré Ward and Carl Thorpe Jr. It would prove to be the biggest asset of the game. When the HC defenders zoned in on Ruck and Bramao, Thorpe Jr. stepped up to the plate. In the third, his effort of 11 points including three getaway dunks was the catalyst for another Combermere run, one that threatened to take the resolve of HC. With more Combermere students along with cheerleaders arriving during the quarter, the noise level rose as their team retook the lead 74-70 after three.

The back and forth final continued into the fourth with HC again showing hearts of lions as they once again battled back into the game after being down 10, 80-70. With four minutes remaining, due to more steals and fast-break layups, the team from Crumpton Street came storming back to tie the game at 85. However, they would only add four more points in the game as they watched Walrond take over the boards and the game. No matter how hard the defenders tried they could not contain Walrond, who was moving like “Optimus”, with big rebounds and athletic finishes over the ring. His 10 points were what really silenced HC along with the fact that HC’s top player, Kyrone Alexander, battled cramp in his right calf most of the second half.

That combination was enough for Combermere to add another title to its name after an outstanding effort by the players on the court and cheering fans in the stands. Boardi finished with a game-high 32 points, Alexander had 14 and Justin Bailey 11. For the champs, Bramao and Ruck scored 25 and 21 points respectively while Thorpe and Browne added 15 and 11.