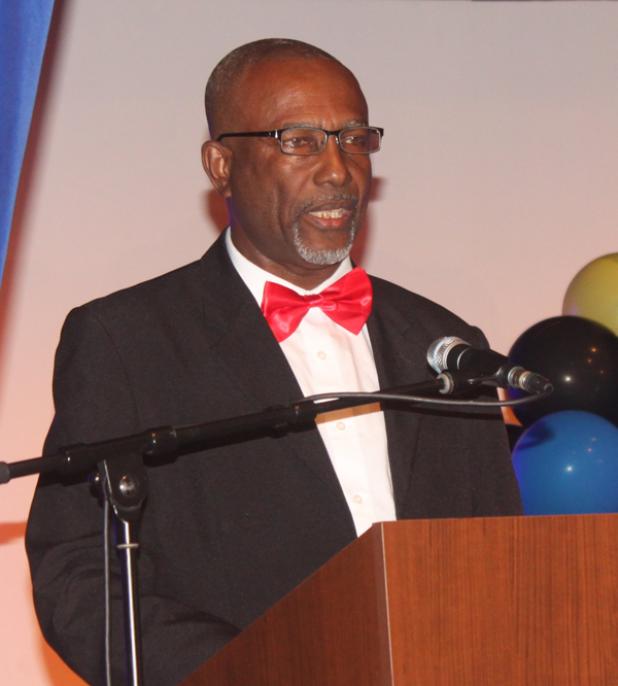 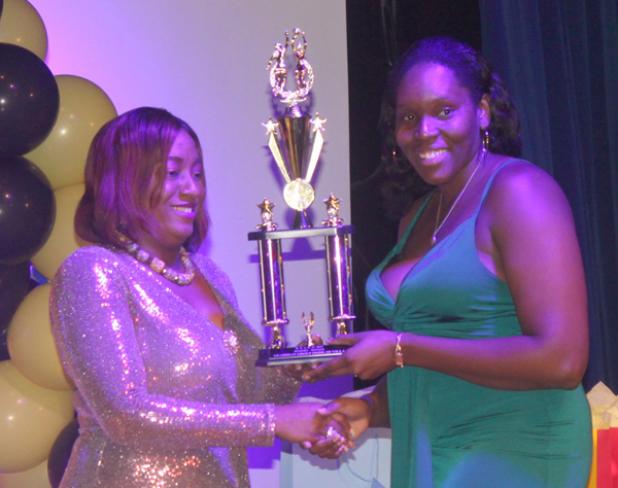 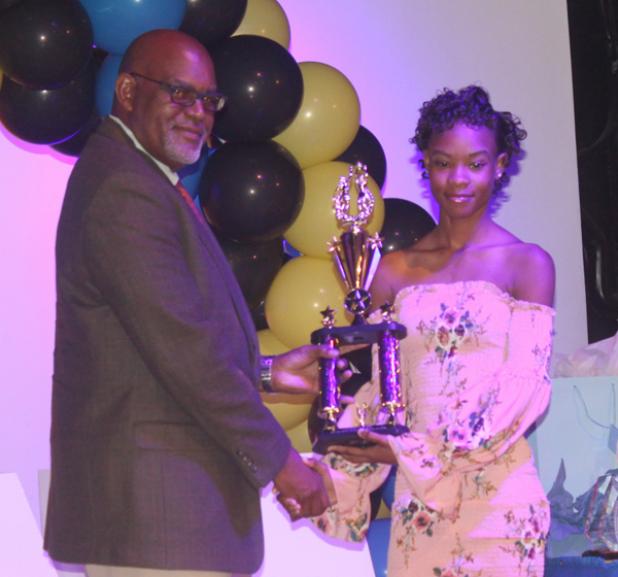 BNA Vice President, Oliver Nicholas, presenting an award to a representative from St. Barnabas Netball Club, who won both the League and Knockout Competitions in the Juniors. They also won Division 1 in the League.

THE top clubs of 2019 had their efforts toasted this past Saturday night when the Barbados Netball Association (BNA) hosted their awards ceremony at the Daphne Joseph Hackett Theatre. With some of the best players in the island playing across the League and Knockout competitions, it was a case of the usual suspects in the line-up as a handful of clubs took the podium spots across the divisions with a few others carving out a small piece of the pie for themselves.

BNA President, Nisha Craigwell, offered the welcome remarks and as she stated that 2020 would be providing an opportunity to start anew for the 45th anniversary of the Netball Association, she took the opportunity to trumpet some of her organisation’s achievements. Noting that there was no shortage of members as there was a vibrant youth programme with new players coming each year, Craigwell highlighted the fact that the National Under-16 team had a solid 2019 and at the end of the year, the seniors were ranked 12th in the world. “While the success of an association is largely measured by the triumphs of its various national teams, I challenge you to find other sporting disciplines that can stand up to the continuous growth of the Barbados Netball Association. We do not have a large pool to pluck financial resources from, but we are rich in talent, administrators, players, officials of the game and most of all, persons who have a genuine love for the sport,” she said.

However, it was not all butterflies and rainbows and Craigwell also took the opportunity to bemoan the treatment of the sport by members of the media and made a call for positive support. “When our athletes are in competition, the constant negatives that are often bestowed on them can derail the toughest member of any team. At the end of the day, our Bajan Gems are world-class athletes who require some additional resources to get them to the next level. Give them the respect that they truly deserve.”

Using the platform to openly share her thoughts, Craigwell added that another major concern of hers was how some national athletes seemed to be discarded after rendering service at the highest level. “An area that has always been of great concern to me personally is where we have several national players who are unemployed. They rise to fame for the two weeks that Barbados is in competition and they are quickly forgotten when the competition ends. I believe that it should never be a case where someone has represented their country at the highest level, especially for an extended period, but then struggle to put food on the table for their family. It is a great injustice and too often I see this scenario play out before me,” she said, urging corporate Barbados to assist as she has in the past with other national athletes regardless of their discipline.

The night’s feature address was delivered by Barbados Volleyball Association President and friend to netball, Kenmore Bynoe. His message was a simple one and he urged members and supporters of the sport to throw their weight behind the association and decisions taken by the organisation. “A coach is selected, support that coach. A team is selected, support every Gem on that team. An executive is chosen and you are so smart to recognise its deficiencies, then offer your services to reduce and eliminate those deficiencies. After all, it is your sport.”

He also drew attention to what he called divisive behaviour between the BNA and the Barbados Association of Netball Umpires, and called for an end to it as it was counterproductive before speaking about the sport’s troubles in securing sponsorship over the years. “Netball is covered in the papers at least four times a week and on national television at least four times a week, offering tremendous mileage for any potential sponsor. What is wrong?” he queried.

Chastising former players, coaches and administrators for tearing down the efforts of the executive, Bynoe said that their efforts would be better spent doing what is best for the sport as it opened doors for many in Barbados. “Netball continues to provide a setting where young girls, many of whom are poor and from depressed areas, experience tutoring from role models who show them the path towards becoming decent members of our society. Similarly, your national players are the envy of other sports and even business executives where the Bajan Gems compete against the best in the world in countries where only the rich can afford to visit. However, more can be achieved and better can be done, but more will not be done and more will not be achieved merely by the actions of the BNA executive or your coaches. Every member of the netball fraternity has a role to play in raising the profile of your sport,” he said.