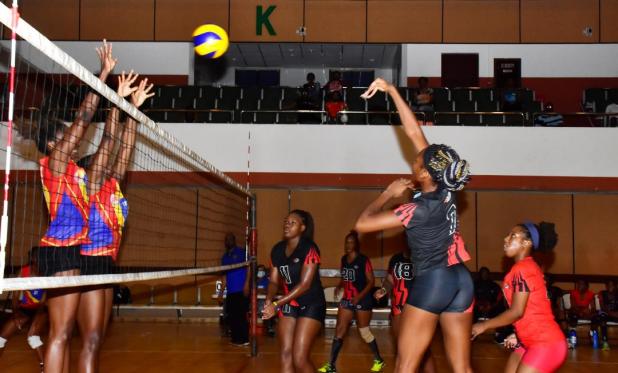 Andrea Oughterson from Chargers (foreground) trying to hit over the blocks of the Toners during their game on Sunday.

Toners victorious over Chargers in five-setter

After a convincing victory last week Chargers suffered a defeat at the hands of Toners on Sunday in the Barbados Volleyball Association’s Senior Knockout tournament.

Playing at the Gymnasium in the Goddard Enterpises Limited sponsored tournament, Chargers had to substitute one of their starting players Sharon Bovell who hurt her knee.

The veteran of the team sat from the first set for the remainder of the match, which may have been one of the reasons for the battle on the court.

Toners and Chargers both played well throughout the game running down the ball and never giving up on the play. Even scrambling and diving on the court on both sides of the net.

But with the chemistry of the Chargers offset somewhat, Toners won the first set 25-18.

The Chargers were seemingly upset by this and came back in the second set with a vengeance. First they raced out to an 11-3 lead thanks to the serve of Dei Padmore who served for many of the early points and Chargers never let up as they closed out the set 25-15 to level the game at 1-1.

In the third set it was the Toners who came back keeping the set close at 11-10 and then going ahead 15-12. Despite some last minute efforts by the Chargers to close that to within one point, Toners never let them get the lead. Eventually winning 25-19 after a 5-2 rally.

Playing to stay alive in the match Chargers managed to win the fourth set easily with a 25-20 but found themselves having to fight from far behind.

Toners had pulled out to a 8-3 lead after the scores were levelled at 2-2 and there was little the Chargers could do to prevent them from going on to win 15-9.