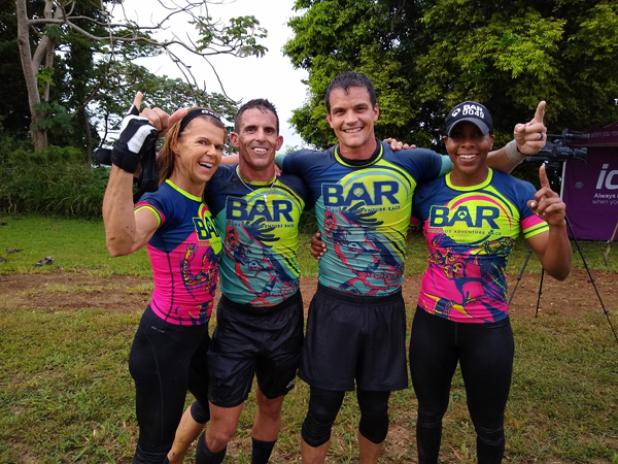 Three-peat for Obstakillers at BAR

The Obstakillers team which comprised of Kim Sealy, Dominique Marshall, Stuart Maloney and Mark Jordan are the three-time winners of the Barbados Adventure Race (BAR) ICBL Team Challenge Final held at PEG Farms over the weekend.

They covered the 10 km course which comprised of 20 obstacles in a time of one hour 43 minutes and 34 seconds.

Second place went to Barbenders, Lawrence Bayne, Sabrina Thompson, Darren Mathews and Leanda Gittens who were just over a minute behind the winners with a time of one hour 44 minutes 50 seconds.

However, Obstakillers were not the leaders as the teams came off the road and back into PEG Farms.

It was LP Mountain Goats that held the lead, followed by Obstakillers and then Barbenders with mere seconds separating the top three.

But then LP Mountain Goats who comprised of Levar Greaves, Renee Greaves, Kayla Tull and Manoj Vensimal got stuck at the monkey bars. According to Levar, their usually strong team mate at this obstacle could not hold on due to the wet and slippery bars. After trying for seven times they finally made it through but then she cramped up on the next obstacle and they were out of the competition.

The battle at the front continued to be a close one with the leading teams reaching obstacles seconds within each other and pushing each other all the way.

At the last obstacle there was a surprise waiting for the team. The previous day they were able to run up the wall using momentum but a four foot wall placed at the based of the slick wall meant they have to use a different strategy. Obstakillers wasted little time and went straight into a human ladder as both teams were in this final obstacle together.

Jordan provided the base for the ladder bearing the weight of two of his team mates on his shoulders at one stage.

They were the first to make it over as Barbenders continued to try to make it giving them what looked like a comfortable victory in the end.

Speaking to The Barbados Advocate afterwards, Stuart Maloney said that this challenge was a little more challenging that the previous one.

“The obstacles were a little more difficult than the first one this year and the competition, people definitely put together teams to dethrone us and kept us on our toes.”

Looking back at the qualifier the day before Maloney said that they had a little stumble at the 10-foot wall where they lost some time but on the final day they used a different strategy overall.

“Today we said we would set the pace as it is easier to keep out front than it is to chase from behind. So we just kept the pace and kept the pressure on the teams behind us and it went well.”

Despite the rain and slippery conditions he said that it did not make a difference as they knew everyone had to be in the same conditions, “slippery for us slippery for all.”

He mentioned that the most difficult obstacle was the log carry as it was a kilometer of undulating terrain. It was here that they managed to open up a gap on the chasing Barbenders and from there they never really closed until the end.

“We just kept steady,” said Maloney. “Our team works amazingly well together. The team dynamics we have I think is what really gets us to excel over everybody else. We work very good as a team. If there is somebody falling behind we would stay back and push them. We just worked to our strengths and it played into our hands.”

He had high praise for the event and the organisers.

“It’s a great race, George (Griffith) does and absolutely amazing job in putting it together very well, very professional, world class and it is a serious challenge both physically and mentally for an athlete.”

“It’s an amazing challenge. At times you wonder why you do but the reward at the end is phenomenal.”