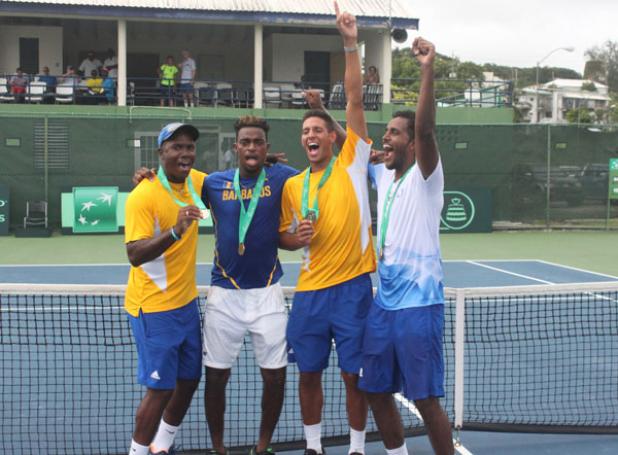 The Barbados Davis Cup team of Damien Applewhaite, Darian King, Adam Hornby and Haydn Lewis celebrating after they beat Venezuela at home to advance Group 1 Americas back in 2017.

Tennis hoping to bounce back in B’dos

The Barbados Tennis Association (BTA) is looking to make a strong return as COVID-19 restrictions ease at home. With the island almost completely open after being declared virus-free last week, the sport is hoping to make the most of the rest of the year.

After being included in some of the earlier relaxations a few weeks prior along with Road Tennis and Table Tennis, clubs and members took advantage and were able to play Singles. However, in an interview with The Barbados Advocate, BTA President Dr. Raymond Forde explained that there was some recovery to be done after the shutdown. “Tennis players have been able to get a bit of exercise prior to the total relaxation. However, the impact has been mainly on the Tennis Centre. Our junior programme has taken quite a hit. Over the years we have had three primary schools coming during their P.E. Classes and as you know there are no schools operating as normal during the third term,” he said.

Noting that their general junior programme for 8-14 year-olds was also shelved due to the virus being detected in Barbados, Forde went on to reveal that there was quite a bit of interest in getting things going again.

“There has been some interest from parents, especially of those kids who have been doing quite well, to see if we could again have a programme started. It will obviously have a lot of differences involved in the social distancing and how we let the kids interact. In addition to that we have a lot of interest in trying to see if we could have a summer camp because the Sports Council has said that they are not having their camp this year for obvious reasons,” he said, adding that there were currently in consultation with the Attorney General’s office to work out how it could be done.

In addition to training and programmes, the scheduled tournaments took a hit and Dr. Forde revealed that one youth tournament had to be abandoned.

“Just before the shutdown one of our junior tournaments had to be foreclosed midway. We are trying to see later in the year if we can pick it back up. Obviously we would need competition for our juniors to see what level they are at.”

With quite a few of the annual tournaments played across the region, Forde said that he expected very little travel for competition. Noting that July and August were the months for tournaments in Jamaica, Bahamas, Antigua and Tobago, he also added that overseas entries for the National Tournament in September going into October were doubtful.

As it related to international competition, Barbados was scheduled to be hosting Indonesia in their next Davis Cup assignment, however, Dr. Forde revealed brand new information that all ties were postponed to next year.

“We were supposed to have a Davis Cup tie around mid-September. We just got official notification from the ITF – just about three days ago – that this is now postponed until 2021. What happened is there is now a world grouping. Before we just played regionals against the Caribbean, Central America and South America, but now we can end up playing anybody from any part of the world once they are in World Group 2,” he said before adding that they were looking forward to hosting a country we have never played before.

He went on to reveal that the pandemic had put a hole in their pockets as it seriously stunted their ability to earn funds.  “Between 6 and 10 PM daily at the National Tennis Centre we normally have some persons who will come and rent the courts. Obviously rental was also down so financially, junior tennis, adult tennis, tournaments – things that you could make money from possibly – every aspect of our tennis operations was affected.”

However, he stated that he was glad that things could move forward.