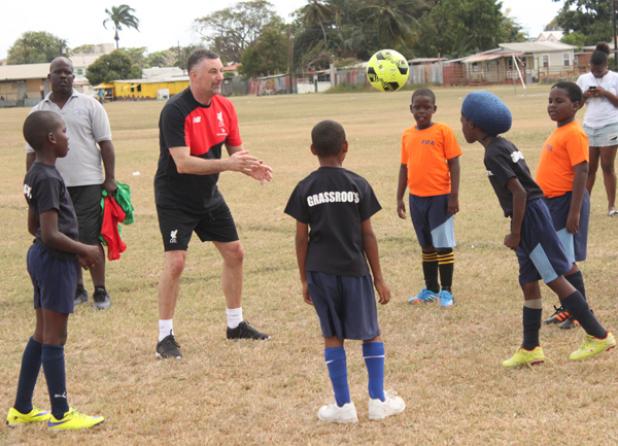 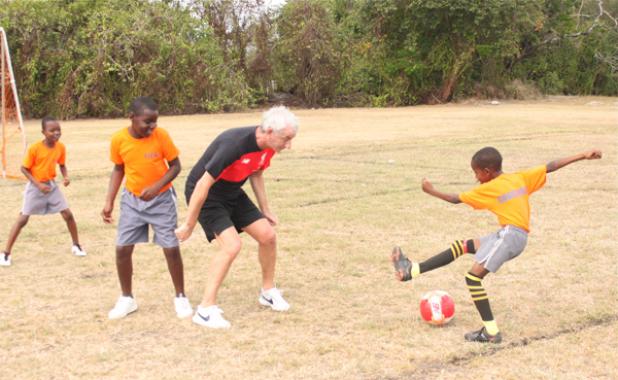 Students get football training from legends

Wed, 03/16/2016 - 12:00am
YESTERDAY, several students of St. Giles Primary and Belmont Primary got a chance to rub shoulders with living football legends, as Liverpool greats, Ian Rush and John Aldridge, conducted a coaching clinic at the National Sports Council.
The event, which is part of a week-long promotion put on in association with The Liverpool Way and the Barbados Tourism Marketing Inc., saw close to 30 budding footballers benefiting from the priceless experience.
Speaking to The Barbados Advocate just before beginning the session, Rush, who is to this day the club’s all-time leading goal-scorer, stated that he was pleased to be in Barbados, and that the main focus of yesterday’s exercise was to ensure that the children were happy in the game.
“It’s always good to come and visit Barbados, but from a football point-of-view, it’s just to give the kids a rundown of what it’s like to be a footballer – the training you’ve got to do and what exercises you have to do to be a footballer.
“But the most important thing is that they are happy and that they are enjoying themselves, and that is what it’s all about... letting the kids run about and keep fit and healthy. You want to see them with smiles on their faces,” he said.
Noting that the youngsters would be privy to tips that kids at Liverpool’s youth academy would also be getting, Aldridge weighed in on the situation, saying that a solid foundation, hard work and discipline could take you anywhere you wanted to go.
“Grassroots is always important. When I was a kid, I used these kinds of facilities. It’s about giving these kids a chance, that’s the main thing – give them some good coaching. It’s very important that they listen to their coaches and parents, so that they can give themselves an opportunity to go on and play for Barbados, and who knows, maybe Liverpool,” he said.