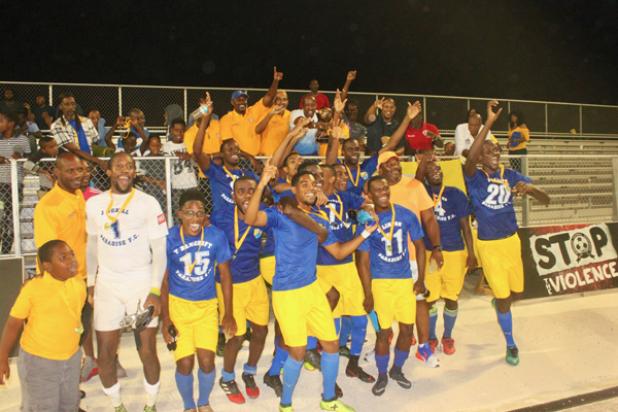 The Paradise FC players celebrating with their fans after the 2-1 win over the Barbados Defence Force Sports Programme.

After last taking a knockout title back in 2005, Paradise FC have risen to the top of local football once again as they capped off their 2018 season with a win in the Stag Beer Champions Cup.

Playing in the Emancipation Day final at the Wildey Turf, Paradise took home a $20 000 top prize when they pulled out a 2-1 thriller over the Barbados Defence Force Sports Programme.

With everything to play for, the two sides went into the first half hard, but nothing would come of it despite several good efforts on both sides. The stalemate was broken at the top of the second half when the soldiers got the go-ahead in the 48th minute. With the ball coming in off a corner from the boot of Raheim Sargeant, it came off Paradise defender Andre Bourne to put the soldiers up.

Eventual Best Midfielder and MVP Mario Williams would be the man to pull Paradise back into the game just nine minutes after in the 57th. With Paradise winning the ball in the midfield, captain Armando Lashley sent a long, searching ball to find Williams, who put a cheeky lob over the head of Kishmar Primus with his first touch.

Paradise would drive the final nail in the coffin with 10 minutes left in regulation time when they bounced back from another Sports Programme offensive. With the ball making it to Dario Harewood close to the half line, he then sent a lovely through ball to Ackeel Applewhaite who picked up and went forward to face Primus all alone. Pushing to the towering keeper’s right and beating him, Applewhaite then pulled a sharp shot with his left boot and rolled as he watched the ball go to the nets.

Having been beaten in the final in 2017 by Weymouth Wales, Paradise capped off the season on a high as they also won the Premier League’s reserve competition. The win was also made sweeter as their last knockout title came from a 3-1 win against the BDF Sports Programme.

Speaking to Coach Kenville Layne after the win, he said that it felt great to take the title after more than 10 years. Calling it a feeling he could not describe, Layne said that the victory was dedicated to Paradise players and fans.

Layne, who has come to be known as one of the trickier coaches, had Williams playing a vital role in the setup and spoke about it.

“I tried to confuse the opponents. If you notice, I started Mario Williams in an attacking midfield role rather than his usual defensive midfield role because I know that the opponents would come looking to shut him out of the game and pin him back there, so I put him up and played three up top so BDF can’t do as they like.”

With Williams scoring crucial goals in both the semi-final and final, Layne said that he decided to explore the lanky midfielder’s talents.

“His striking role when he scored last week and this week is because of what I saw at training. He was scoring a lot of goals so I decided that I could use this man in another position other than just holding in back. I was just playing off what I was seeing in training over the last few weeks.”

Going on to say that he was not overly-concerned with the SportsProgramme’s opening goal, Layne said his main objective was to avoid extra time as players started to pick up injuries and cramp in the latter stages of the game.

“If it was in the dying minutes of the second half, then I would be a little worried. We still had time and I wasn’t worried yet. If it got there then we would have to try something else. Our game today was about getting the ball in the attacking third and forcing them to make mistakes. No nice passing and not a lot of ball possession. I just tried to use a different method of getting the result,” he said.

Earlier in the evening, Wales took third place with a 2-1 win over Brittons Hill United after Hadan Holligan (30th) and Kemar Holligan (54th) put the ball in the back of the nets. Brittons Hill got their goal from Donte Greenidge in the 49th.

There was a special celebrity game in the middle and the BFA Shottas also had a 2-1 scoreline over Stag Issa Vibe. Goals from Minister in the Ministry of Finance Ryan Straughn and entertainer and DJ Patrick ‘Salt’ Bellamy put the Shottas in control; while a consolation from national team Manager Martin Newton drew the Stag team level in the second half.