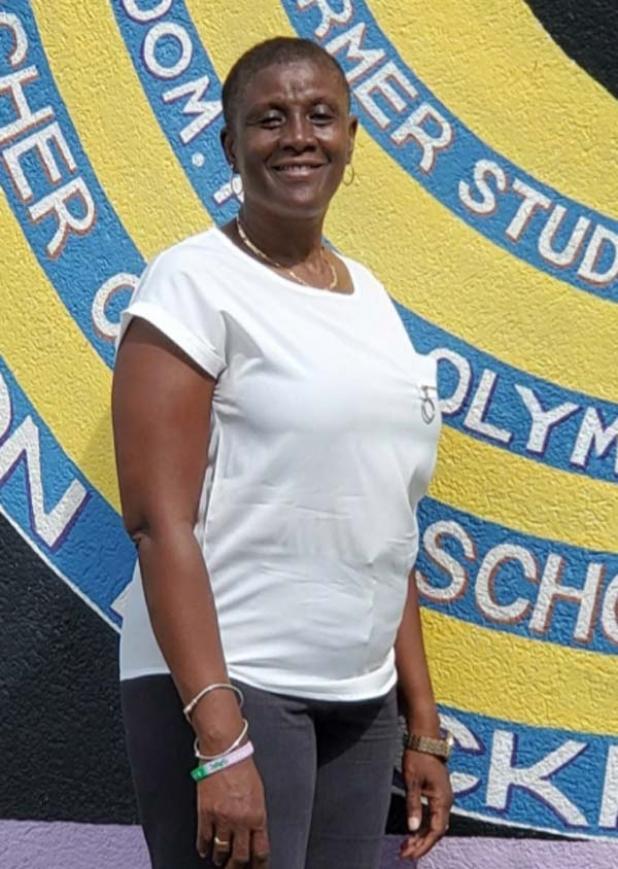 Ms. Carlon Blackman who represented Barbados at the 1984 Summer Olympics in Los Angeles.

The St. George Secondary School (SGSS) recently honoured its heroes in sports with the unveiling of a mural at the school, declaring it the Home of Olympians.

The unveiling came during the school’s recent 48th Anniversary Founders’ Day celebrations, where  principal Dennis Browne announced that former student and present teacher Ms. Carlon Blackman, who represented Barbados at the 1984 Summer Olympics in Los Angeles; as well as Abbygaile Mayers, a current student of the school who represented Barbados at the 2019 Special Olympics World Summer Games in Abu Dhabi United Arab Emirates, would be recognised for their outstanding feats.

“(We have an) impressive number of graduates of this school holding significant positions in our nation, region and the world. Our alumni include doctors, beauticians, teachers, artisans, lawyers, nurses, highly ranked policemen and officers of our Defence Force, politicians, entrepreneurs, and many other successful and productive citizens. So it is with this in mind, that we take the opportunity on this special occasion to honour our ‘Heroes in Sports’,” Browne said during the ceremony.

“Today we honour the sporting heroes among us, who will receive a token of our appreciation, as well as those who are not in attendance who have carried the name of this school on their shoulders, representing this school as ambassadors with pride, and by extension this country, through their excellent ability of physical and mental skills. Additional honours will also be bestowed on two of our own – Ms. Carlon Blackman and Abbygaile Mayers, who competed at the Summer Olympics (1984) and Special Olympics (2019) respectively,” he told those gathered.

“Special mention must also be made of Dequan Lovell, who was awarded an athletic scholarship by the Athletic Association of Barbados (AAB), and is now studying at Coffeyville Community College in Kansas, United States of America. I particularly made mention of their mental skills because not anyone can do what they do. It takes mental preparation which involves knowledge of the sport, logical reasoning and calculations of how to win. It takes commitment, dedication and discipline to duty, such as extensive long hours of vigorous physical training. It takes the development of good communication skills of understanding and expression when communicating with their opponents, the media and the support team. And of course it takes passion and enthusiasm in their respective discipline to remain steadfast on their journey, day in day out, year in year out,” Browne said of their achievements.

Officials from the Ministry of Education witnessed the unveiling.