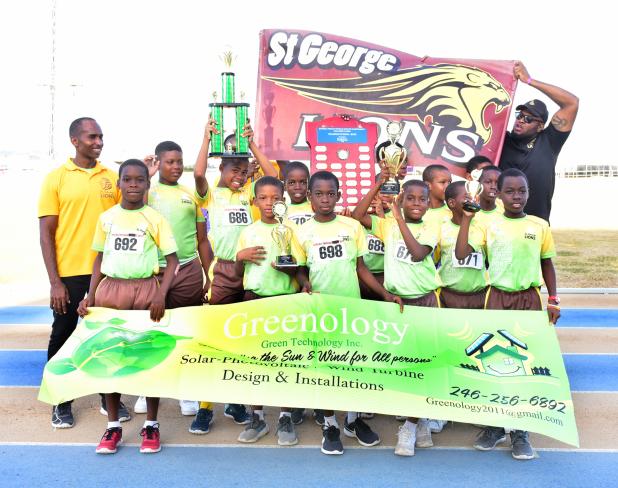 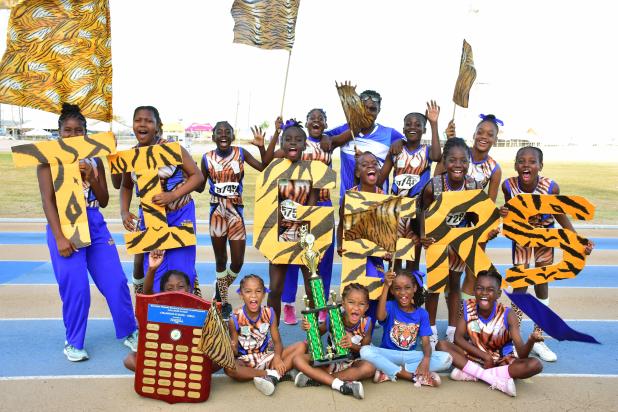 West Terrace Tigers are the Girls’ Champions of the 2020 NAPSAC, claiming their third title.

St. George Primary Lions roared into the lead at the end of the 200 metres and never looked back as they went on to claim their first ever Boys’ title at the National Primary School Athletic Championships (NAPSAC).

West Terrace Girls stopped St. Giles’ win streak as they returned to the National Stadium for the first time in a few years and also to the pinnacle of the standings with 153 points.

At the end of the 100 metres, St. George trailed Bayley’s Primary by 12 points. They moved into the lead after the 200 metres by 15 points and that is where they began to build on their lead.

Victory in the medley relay and then third place in the 4x100m relay saw them end the day on 117 points, to win by 27 points.

The medley relay team for St. George was a powerful quartet that went on to break the record. A combination of Ethan Hart on the 200-metre leg and Zachary Wall on the 400-m, along with  Tamarion Lynch and Malichi Gooding.

Leading the relay after the first two legs, Hart powered away from the field in the 200m leg and then it was left up to Wall on the 400m leg.

Wall paced his race perfectly, running at a comfortable clip until he hit the 200m marker when he turned on the afterburner and sprinted for home to cross the line in 1:50.90, to replace the old record of 1:53.90, which they set on March 9.

Bayley’s slipped further and further down the order to eventually finish fourth with 82 points.

Making their way into second place was St. Alban’s Primary with 90 points, with a record-setting victory in the 4x100m Under-11 Boys’ of 55.79 seconds and a third place in the medley.

Third in the Boys’ standings was Luther Thorne with 88 points.

West Terrace was as high as third place at one stage and eventually finished fifth with 72 points.

Meanwhile, West Terrace always held a commanding lead in the Girls’ standings throughout the day and then won three of the four relays.

Even with one of their athletes not making it to the start of the 200m due to problems breathing, it was not enough to stop the 57-point victory.

Second place went to the defending champions St. Giles’ with 96 points, while Bayley’s was third with 94 points.