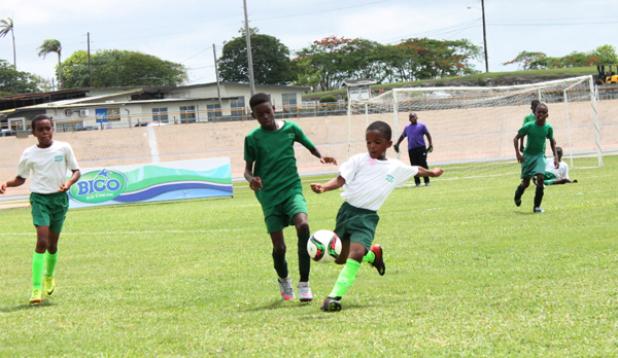 Seth Jones of St. Cyprian’s (right) making it to the ball first to make a clearance.

Wed, 06/15/2016 - 12:00am
By:
Michael Phillips
Two of the semifinal spots in the BICO National Sports Council Primary Schools Football Competition were filled yesterday when the quarterfinal round kicked off at the National Stadium. St. Cyprian’s Boys and Bay Primary now move into the semis where they will face each other after both teams picked up wins on the day.
St. Cyprian’s were first to book their spot with a five-one drubbing of Zone 7 winners, Milton Lynch. Dominic Downes, who ended with a brace, opened the scoring in the third minute with a lob over the head of the keeper, Cy Gilding, after picking up a cross on the right just outside the box. Marcus Whittington made it two-nil when he hit an absolute scud from just past the half on the right side. The ball sailed over all and sundry and rolled violently into the nets in the 17th minute to see St. Cyprian’s to a two-nil lead before the break.
It was more of the same when the teams switched sides. Once again, three minutes into the half (23rd minute), St. Cyprian’s were celebrating as Jaydon Sealy sank a beautiful free-kick from the left flank against the wind. Two minutes later, Downes got his second goal when he was fed in the box. A sharp one-two play left Milton Lynch in a world of hurt as Gilding had conceded his fourth goal.
The trailers were able to pull one back in the 29th minute when Edward Downey put a corner kick past the line that left the opposing keeper, Jireh Malcolm and his defensive line dumbfounded. St. Cyprian’s never gave up their push and fought for every chance as despair began to creep into the Water Street camp. A fifth goal came from the boot of Sealy as he converted a penalty in the 38th minute awarded for a hand-ball in the box.
The second game was a much closer affair as Bay Primary stole away a one-goal win from Zone 2 winners, St. Alban’s. From the get-go, tournament top-scorer, Amir Gustave was in the face of Jerimiah Worrell and he made good on his first attempt at goal in the second minute. Gustave, who scored 18 in the preliminary round and one in his first playoff game, added another when he got the ball and took on Worrell to put the ball just over his head.
That would be the only goal in the first half despite St. Alban’s having several chances at Bay Primary’s custodian Michael Browne. Just like the earlier game, a corner kick dropped in the nets at the North end and this time it came off the boot of Gustave, putting him on a total of 21 goals for the season. Contrary to the norm, Gustave’s 24th-minute goal saw St. Alban’s playing with an invigorated fervour and they created even more opportunities to score.
Their breakthrough came in the 27th minute with a foul in the box. Jabbary Cumberbatch took the kick which Browne got a foot on to send it back out. However, Cumberbatch remained collected and pounced on the rebound before putting it away. Continuing to put pressure on Bay Primary, St. Alban’s just could not find the magic to complete any of their many attempts at goal and thus the game ended in favour of the Zone 5 winners.
The other quarterfinals are set for tomorrow at the National Stadium from 10:00 AM. Zone 8 winners, Blackman and Gollop and Zone 7 runners-up, Arthur Smith Primary are up first while Charles F Broome and Deacons lock horns at 11:00 AM.