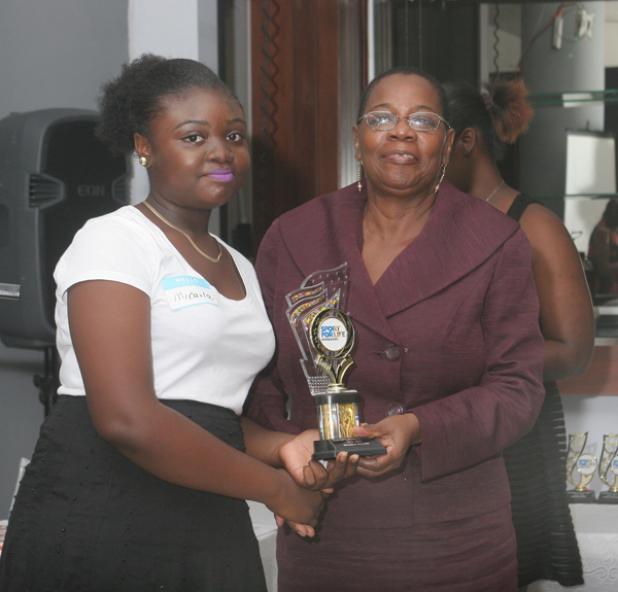 Combermere’s Micarla Archer proudly receives her award for the Most Outstanding Female and Overall Outstanding Participant. 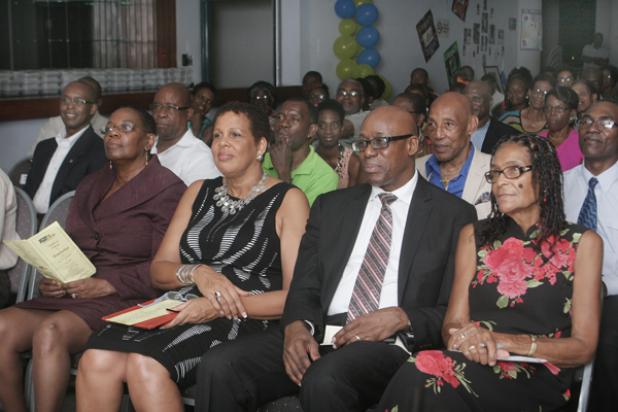 Audience listens intently to the synopsis of this year’s SFL journey by Kathy Harper Hall.

Sports for life the wise choice

UNDER the canopy of the Kensington Oval, Sports for Life (SFL) Barbados Inc. proudly celebrated  the success of thirty participants in the 2015/2016 programme, as they graduated. SFL Programme Director, Kathy Harper-Hall, welcomed the participants, parents, sponsors and guests to the special occasion, to honour the 30 participants.

The programme, which is in its seventh year, started in September 2015 and ran for nine months, to June of this year. Harper-Hall expressed her thanks to the sponsors, Sandy Lane Charitable Trust, Massy United Insurance Co. Ltd., the National Sports Council and the Barbados Cricket Association, along with parents and volunteers for the financial assistance that gave the programme life.

With the aid of the sponsors, the children were able to attend classes in Remedial Mathematics, English, Reading, and Information Technology. They were also exposed to craft, drama, cricket skills, self-defence, table etiquette and Basic Life Skills, in which there were discussions about decision making, conflict resolution, self-esteem, team work and others.

Field trips were also part of the curriculum, and one of these trips was to King George Memorial Park, where they played a cricket match against a team from the Princess Margaret Secondary School. They also attended a tour of the Barbados Fire Service, where they were given lessons in firefighting and precautions for fire prevention.

Harper-Hall was thankful for the success of this year’s programme, and lauded the volunteers for their commitment and perseverance.

The programme started with 37 participants and 12 volunteers, and despite challenges with finance, volunteer availability and a move from the usual location for classes to the second floor of the bond used at the 2007 World Cup, thirty of the children had made it to the end. Some of them were so enthused and touched by the volunteers and structure of the classes, that they would love to attend for another nine months.

Some of the participants gave testimonies of the journey over the last nine months, and were happy with the decision to attend. Ruth Blackman, Permanent Secretary of the Ministry of Culture, Sports & Youth, stated that the SFL motto, “The choices I make today will determine the course my life takes tomorrow”, was very fitting for the occasion.

She spoke to the children and the congregation about the power of choice, and said that the parents of the children had made a wise choice, and it was an evening to celebrate that choice. She also thanked the volunteers and facilitators for the good work they had done over the duration of the programme.

Massy United Insurance Co. Ltd., represented by Business Manager, Sharon Alleyne-Elcock, and Sandy Lane Charitable Trust, represented by Trustee Julian Sacher, both lauded the performance of the programme.  They also confirmed the intention of both companies to continue the financial support of the venture, with the vision of seeing it grow from the idea birthed and carried by the late Stephen Alleyne.

In attendance was Yolanda Alleyne, Stephen Alleyne’s widow, and she was also thanked for her commitment to the cause. Alleyne was very involved in the raising of funds, including participating in marathons overseas, with the goal of collecting funds for Sports for Life.