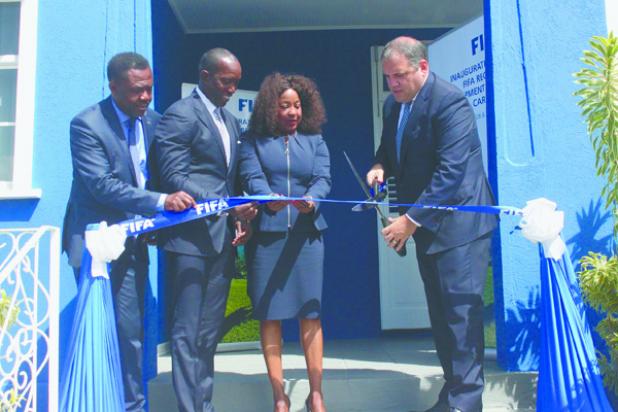 After operating in Barbados since the latter part of last year, the FIFA Regional Office was officially inaugurated yesterday at its Hythe Gardens headquarters.

Set in Barbados as a hub destination to preside over most of the nations in the Caribbean, the offices were opened in a ceremony that saw presidents of the region’s football associations and high ranking FIFA and CONCACAF officials in attendance.

With the event serving as one of the very first assignments for newly-appointed Minister of Creative Economy, Culture and Sports, John King, the former calypsonian gave the assurance that the government is committed to the development of the sport locally and in the region.

“Football has been a passion of this country and the region for a very long time and to have FIFA bring their regional office here is really exciting times for us here in Barbados. We look forward to working with you and you have my assurance that whatever is needed, our government will be there to walk with you hand in hand to improve the standards across the Caribbean,” Minister King said.

Before running off to his very first sitting of Parliament, King said that he hoped for the best for the region’s teams in the future.

“I really do look forward to seeing territories like Barbados and Grenada and St. Vincent and some of the others really challenging the rest of the world in the coming World Cups and I think this is going to be the beginning of it. We will have a very fruitful relationship.”

FIFA Secretary General Fatma Samoura was one of the VIPs in attendance and she said that she was pleased to see FIFA’s work paying dividends.

“As you may know, I was announced as FIFA Secretary General two years ago on the same day that the ‘FIFA Forward Programme’ was presented. At that time, this is what it was, a programme and a masterplan. A place to change the face of football development for the better. To invest much more than ever and to increase efficiency and oversight. As I stand here in a location like this, I just realised how fortunate I am to witness this promise coming to fruition everyday around the globe.”

Noting that there were other offices like this one around the world, Samoura said that the region was in capable hands and should expect to see strong growth in the coming years.

“The development of offices like this one today are the centrepieceof the ‘Forward’ Programme machinery. We have the FIFA presence on the ground where projects become a complete reality. The Bridgetown office is the new home for this region’s football development. From today on, the qualified professionals working here are the trustees of the enormous potential to develop the game It is up them to provide support and expertise and I have no doubt this means that the potential is in very good hands.”

FIFA Vice President and CONCACAF President Victor Montagliani also addressed the audience and said that this office and others like it we integral to the development of the sport across the globe.

“It’s not only for the support that it will provide to our region. But what is also very important, which is the way moving forward in football as we all know in CONCACAF, is the coordinating of events and development with the region and with CONCACAF. As FIFA has seen, CONCACAF has become a model for football globally, in that we have put football first. Not only have we put football first, but above all in CONCACAF what is most important is family. As our ‘One CONCACAF’ vision has shown, that family above all, will get us through and get us to where we need to get,” he said.