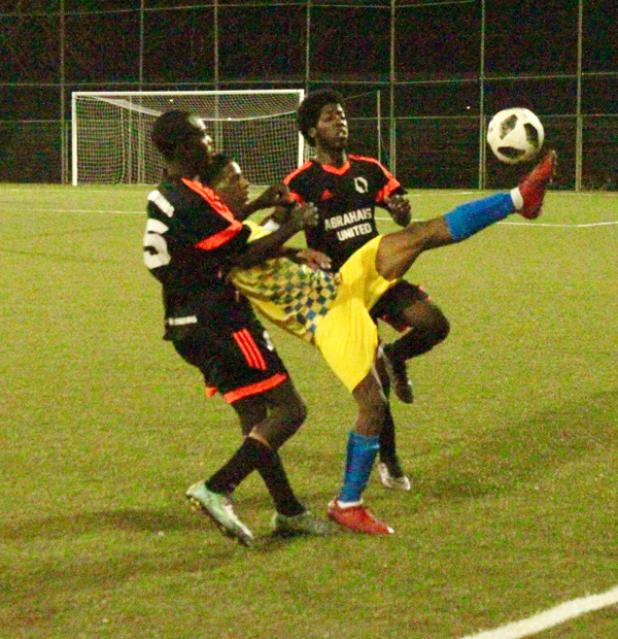 Paradise’s Elijah Downey reaching out to get his foot on this ball with two Silver Sands defenders on his back.

THE Barbados Defence Force Sports Programme have opened up their lead on the rest of the pack in Zone 2 of the Barbados Football Association Premier League with yet another win as they seek their first title in two years. Playing in their fifth game of the tournament on Saturday at the Wildey Turf, the soldiers bombed Mark’s Auto Spares Porey Spring as they blasted five unanswered goals past their opponents to stand on 15 points on the table.

The ordeal began for Porey Spring just 18 minutes into the encounter as T’Shane Lorde opened the account in the 18th minute. Making it all look rather easy, the soldiers outran and out-passed the St. Thomas side to dominate the proceedings. A second goal would come just shy of the break as Akeem Hill gave the soldiers a 2-0 lead in the 43rd.

Porey Spring, who are currently third in the group with four points from five games, have yet to win any of their games in the Premier League. Their chances at a win in this latest game drifted even further away as Raheim Sargeant opened the second half with a goal in the 48th. Ten minutes later, Kyle Gibson made it 4-0 as his goal buried Porey Spring even deeper in despair. The final nail in the coffin was driven in by Shaquille Boyce in the 80th minute.

The night-cap game was a Christ Church der-by between Abrahams United Silver Sands and Paradise. The match-up did not finish favourably for either side as they played to a goalless draw. Both sides left frustrated as they both need points to better their positions in Zone 1.

Silver Sands are in the relegation zone with only four points from five games. They have a single win and a draw with losses in the other three games for a fifth place. Paradise, on the other hand, are second with seven points off two wins and a draw.

Paradise are very easily the better organised team, but failed to capitalise on that advantage as they struggled to put away chances, with several shots being sent unnecessarily wide of the target. However, the highlight of the match was Silver Sands’ Gabriel Layne, who made several top-shelf saves to keep his team alive and frustrate the Paradise attacking line.