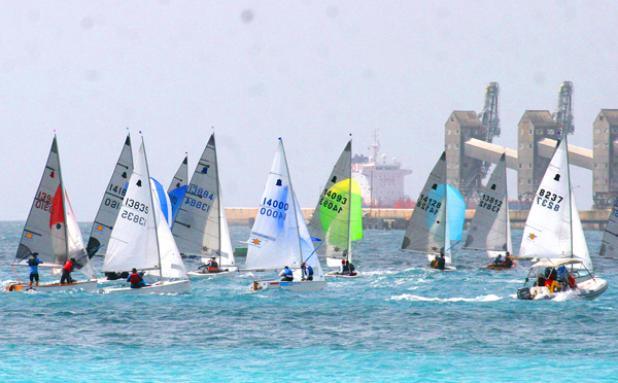 Competitors of the GP14 Sailing Championships fighting for the best position on the water.

Smooth sailing so far at the GP14 World Championships

Sun, 04/03/2016 - 12:00am
By:
André Springer
BESIDES the strong windy conditions on day three, great days of keen racing are what the GP14 World Sailing Championships hosted by the Barbados Yacht Club has been described as so far with welcoming people and a great atmosphere in Barbados.
These Championships are the biggest sailing events for Barbados and commenced on March 26th and will come to a close today, April 3rd. So far, with the 105 entrants for the competition, six of the ten races have been sailed with the closing ceremony slated to be Monday night at the Barbados Yacht Club.
Competition has been so stiff on the seas that there has been only one repeat winner amongst the winners and that has been Ian Dobson and Andy Tunnicliffe sailing under the banners of RWYC/ Burwain SC GBR (Great Britain). Sailing in boat #14186, Dobson and Tunnicliffe won Race 2 and Race 5 but are in second place with 15 Nett points counting themselves lucky even after incurring a damaged rudder in windy Race 4 and were unable to make it back out to the fleet before the Race was cancelled.
In first place sit Nick Craig and Tobytastic Lewis of GBR with a net point total of 13. They managed to take their boat across the line in the top five of five out six of the races, finishing twice in second place in Race 2 and Race 5 and third in Race 3 and fifth in Race 1.
Sailing into third place, also with 15 points, is the Irish team of Shane McCarthy and Andy Davies under the Greystones Sailing Club. The two Irish members are the only team who are currently in the top five that have not won a race so far but have been consistent enough to place in the top five of all but one of the races. They took second in Race 5, third in Races 1, 2 and 4 and fourth in Race 6.
Sailing in boat # 14187 are Mike Senior and Chris White of South Staffs SC who are currently in fourth place. Senior and White also have been able to finish in the top five in almost all of the races so far and won Race 4 on Day 3 of the Championships under difficult windy conditions. It was their best race for the Championship having placed seventh, fourth and fifth in Race 1-3 respectively and fourth and third in Race 5 and Race 6. At the end of Race six, Senior and White ended the day with 17 points.
Rounding out the top five overall, all of which are in the Gold Fleet, is the Poole YC / Hayling Island SC duo of Matt Burge and Paul Childs from Great Britain. Burge and Childs finished first in the very first Race of the Championships but have not been consistent since then and have only placed in the top five in three of the six races. The positive for them however is that they finished second in the most recent event (Race 6) to give them Nett of 23 points and will look to ride the momentum in the upcoming races today.