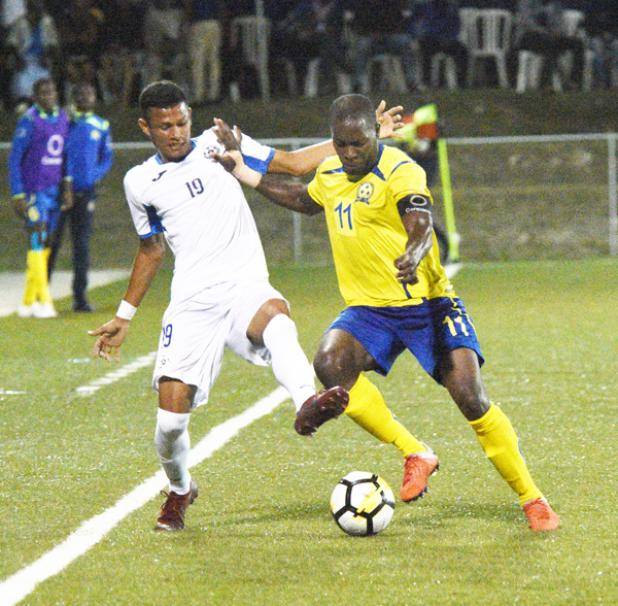 Barbados Captain, Rashad Jules (right), puts his hand on Nicaragua’s Camphers Perez as he keeps him off the ball. 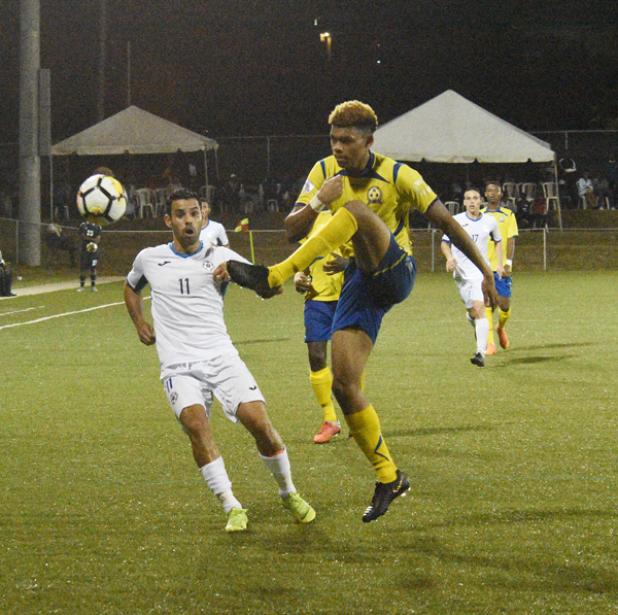 Nicaragua’s skipper and goal-scorer, Juan Barrera, has an opportunity cut out by Barbados’ Kaeson Trench. 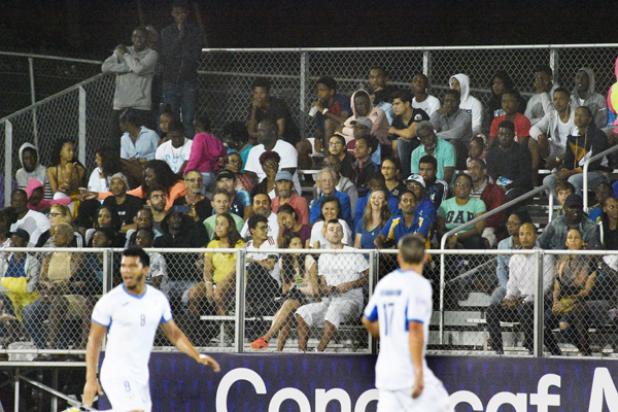 A section of the crowd at the Wildey Turf.

THE Bajan Tridents saw a chance to qualify for League B in the CONCACAF Nations League slipping out of their hands as they went down in a slim 1-0 loss to Nicaragua on Sunday night. Playing in front of a packed crowd at the Wildey Turf, it was a second-half goal that gave the Central American visitors the edge on the hosts and a spot in the CONCACAF Gold Cup.

From the 8 p.m. kickoff, the Tridents looked solid as they held their own against the 128-ranked Nicaraguans. Controlling the majority of the possession, Barbados had a few bites at the cherry as they were constantly in the face of Nicaragua custodian, Justo Lorente. However, they were unable to convert and both sides remained goalless into the break.

Coming back out for the second half, the Bajans took on a different complexion as they seemed to take their foot off the accelerator and give the visitors a bit more room as they played a more defensive game.

The game-winner came in the 65th minute from the Nicaragua skipper, Juan Barrera, when Carlos Chavarria sent a ball across the box from a corner kick. Barrera met the ball just in front the uprights and flicked it off his heel to get past Keasel Broome.

In the post-game conference, Nicaragua Head Coach, Henry Duarte, speaking through a translator, said that he came into the game expecting a tough game and he it, but made the most of the opportunity afforded his team in the second half. “I have to say that this is one of the most intense matches that we have faced out of the four. I noticed that during the second half Barbados lost their condition, so we took advantage of that,” Duarte said.

Going on to say that his game-plan had to be drastically changed due to the tactics employed by Barbados, Duarte added that all credit needed to go to his players. “We had a previous plan for the match, but we could not execute quite as we thought, but I have to congratulate Nicaragua players. They were the ones on the field that made the space and on the one chance they had, they scored,” he said.

BFA Technical Director, Ahmed Mohamed, closed out his account as Head Coach with this game and was a bit disappointed, saying that his boys played better than Nicaragua, but did not get the desired result. “The team played very well in the first half, so the majority of the game we executed our plan very well. We were the better team. My boys showed character. My boys showed willingness, that they wanted to play very good in this game. And in the second half, the one second that we slipped, we were punished.”

With Niall Reid-Stephen making his senior team debut in the game at 17, Mohamed spoke highly of the youngster when asked about his inclusion in the 57th minute. “Niall came in and had a couple good chances. He is very mature for his age and he played very well. You could not see that was his debut. Form the time that he came in, he gave us the boost that we wanted and he did his job very well. Offensively and defensively, he did a very good job. For a 17-year-old he did a great job,” Mohamed said.

Barbados Captain, Rashad Jules, said that despite losing, his team felt good about their showing as they had a sound game against a team full of professionals. “The guys are in pretty good spirits to be honest. I think they did very well. They also think they did very well against a team of that calibre. There’s a lot to learn from the game, so we plan to just learn it and move forward,” he said.