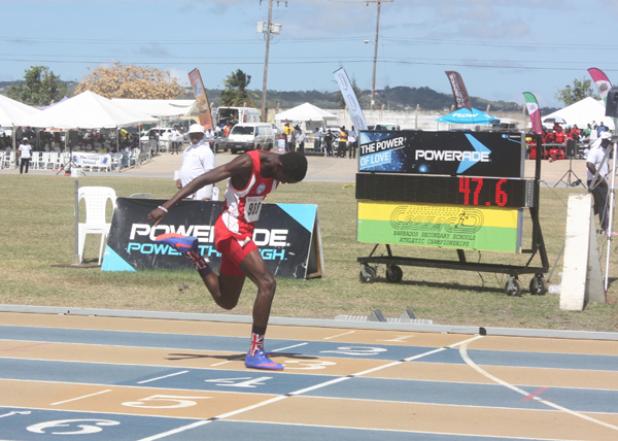 Thu, 03/17/2016 - 9:04pm
Records were made to be broken and the first day of the PowerAde Barbados Secondary Schools Athletics Champion-ships lived up to that statement. From the very first final event of the morning on the first day, records began to tumble at the National Stadium.
Mary Fraser of the Daryll Jordan Secondary School ran an exciting final 100m of the Girls Under 20 1 500m Distance Race to take down Elizabeth Williams of Christ Church Foundation to take gold at the record time of four minutes 46.13 secs (4:46.13). She broke the previous 2012 record time of 4:46.73 by Sonia Gaskin of Parkinson Memorial School. Fraser pushed Williams in the final lap of the race to run a brilliant time as well to go beneath the previous record with a time of 4:46.18 and the silver medal. When asked about her run Fraser said that she knew she could run faster, but was battling sickness previously and was unable to train as she would have liked. She also stated that in her opinion she was not fit but tried her best especially since she had run the 400m qualifying race earlier that morning.
The Under 17 Boys 400m race was the scene of another special run by a special athlete. Antoni Hoyte-Small of Queen’s College heated up the track as he ran past all competitors to win and break the former record of 48.00secs. He ran a time of 47.86 secs to eclipse the old time set by the well-known Wilan Louis of the Christ Church Foundation School. Hoyte-Small said he was on top of the world at breaking the record. He was proud to represent his school and that he tries to be excellent at all times since the school always promoted excellence. He also mentioned that he was very fatigued due to running the 400m and 100m preliminaries earlier in the morning. When asked about his plan for the 100m final later in the day, he stated that he would run his best as he didn’t want to be injured.
Sada Williams of Harrison College blazed around the track in the Under 20 400m race as she wrote her name in the history books once again by breaking her own record. She ran a time of 53.13 secs, almost a full second faster than her previous record time of 54.04 secs. Williams after the race said that she was disappointed in her time and had the goal to run a faster time in the range of 52 seconds. Her main concern about the race was not her completion but running in lane seven and not being able to see the other athletes. She said her coach told her to run the first 200m quickly and so she followed his instructions and just finished strong. Williams says that she is confident about the CARIFTA games this year and is looking to run in the 51 or 52 second time range.
Rashad Phillips of the St. Leonard’s Boys’ Secondary School also claimed the new record in the Boys Outdoor Pentathalon 110m Hurdles. He finished in a time of 14.59 secs, faster than the former time of 15.05 secs set by Akeem David of the St. Michael School in 2014.
Tyal Antoine of the Lester Vaughan School peaked at the right time as he broke the Junior 100m Hurdles record. He had a fast finishing run and completed the race in a time of 14.55 secs, breaking the previous time of 15.00 secs set by Enrique Babb last year.
Darian Clarke of The St. Michael School sprinted past the competition to shatter the previous record in the Under 15 Boys 200m with a time of 22.13 secs. Clarke broke the record of 22.34 secs, set in 2014 by Tremaine Smith. (AS)