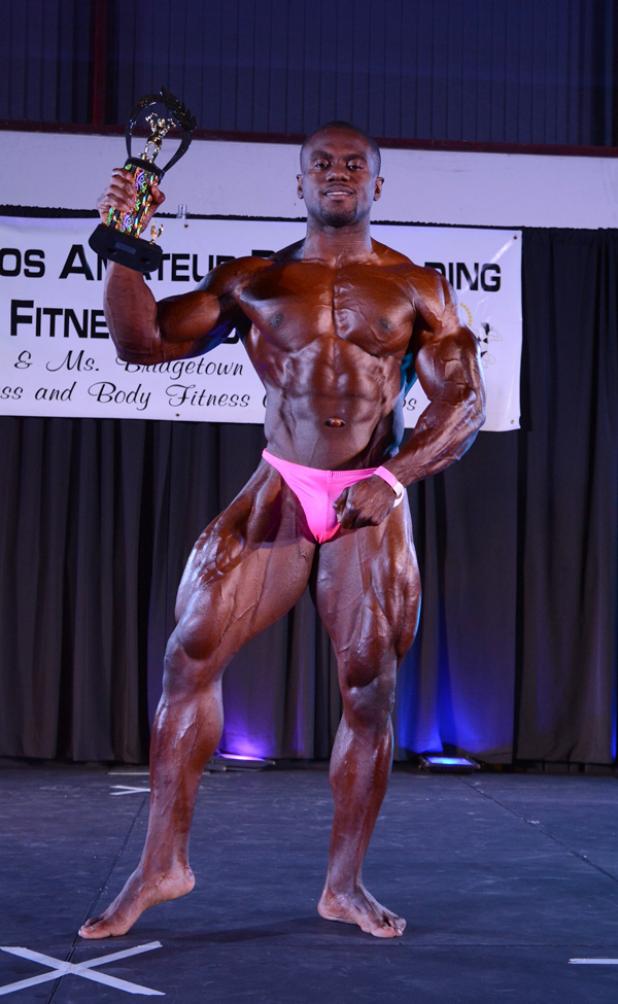 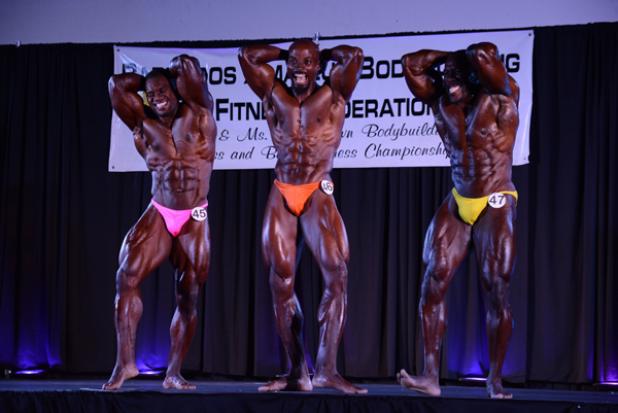 David Small (c) caught in the middle of the battle between Ramon Broomes (l) and Kirk Allyene (r).

IT took the judges three different comparison looks before they were satisfied they had the winner and when the dust had settled it was Ramon Broomes who captured the “Mr. Bridgetown” title.

The 27-year-old Broomes was fresh off placing fourth at the Arnold Brazil Classic and was the favourite coming into the Barbados Amateur Bodybuilding and Fitness Federation show at the Lloyd Erskine Sandiford Centre on Saturday night.

Broomes was called out in the first comparison with a ripped Kirk Alleyne and Shaquille Lavine. The conditioning of the three athletes was sharp, as all three athletes made a legitimate case for the title. These three top competitors looked confident and had the chiselled physiques to match. Alleyne was holding more water than his other two competitors and started to sweat during the gruelling marathon on the stage. After the first comparison, the judges still weren’t sure who deserved victory and the three athletes swapped places and went through the compulsory poses once again.

Alleyne’s back development looked wide and deep and he may have taken the edge there, but barely, as Broomes and Lavine also had some impressive form. The three had shoulders which resembled boulders with Broomes having a bit more fullness in his muscle development. However, where the title may have been won – was the legs.

Alleyne and Broomes carried the bigger legs of the trio but it was Broomes who with his back poses showed the development of the hamstrings, which popped out.

The athletes were sent back to the line up and may have thought it was over with one hunched over trying to recover from the ordeal, but as the numbers for the next comparison were called it was once again Broomes, Alleyne and Lavine. One thing was certain – the top three was coming from this group.

When the results were announced, Lavine was third and was visibly upset with the decision. After taking his medal from Darcy Beckles, he took it off his neck and threw it to the ground, walking off the stage before the top two were announced. As the crowd held their breathe, it was Alleyne who took second place as Broomes repeated his victory from last year.

The other two competitors in the class were David Small and Roger Streake.