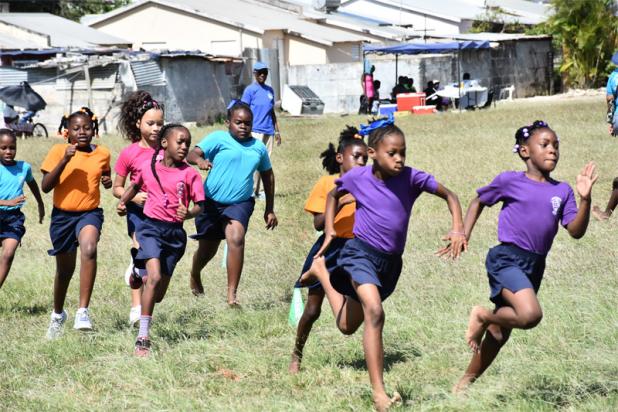 Purple House repeated as champions of the Bay Primary School Track & Field Championships yesterday at the school grounds, winning the title with 263 points to open the 2020 Track & Field season.

It was an exciting start to the new athletics season at Bay Primary that saw parents and friends come out in their numbers to support and cheer the children on at the well organised day. Purple destroyed the field for a second consecutive year with the closest rival Teal House ending the day with 197 points. In third place was Fuchsia House on 140 while Orange closed out the houses with 121.

The Victor Ludorum honours went to Class 3 boy Damain Bynoe-Jones of champion house Purple who amassed a whopping 24 points. Bynoe-Jones had the crowd running with him and cheering him on as he was uncatchable throughout the day. He won the Class 3 Boys 800m, 400m, 200m and 100m.

Class 4 girl Kiana Mullin was the Victrix Ludorum with 20 points having won the 600m, 400m to sweep the top athletes for Purple on the day. Mullin also placed second in the 200m behind Jakayla Smith of Fuchsia House and second in the cricket ball throw to finish with 20 points.

The Class 4 Boys champion was Ashavin James with 18 points, continuing the dominance of Purple House. Brenesha Bynoe claimed the Class 3 title with 19 points, making sure that Teal had something to cheer about. Tyler Redman also of Teal blazed a trail to win the Class 2 Boys title with 12 points but Tariah John of Purple took it to another level with her 16 points to lift the Class 2 Girls

crown. They also say that a little child shall lead

them and that was definitely the case for the Class 1 Boys and Girls champions with Jario Evans of Purple and Dashaira Crichlow-Grant of Fuchsia taking the honours with 18 points apiece. (AS)