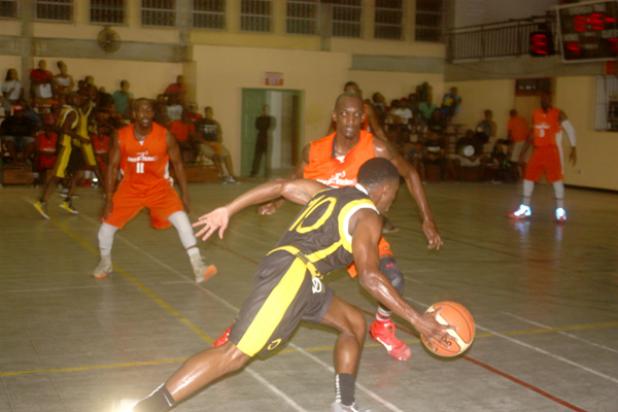 Tue, 05/24/2016 - 12:00am
By:
André Springer
In a physical, down to the wire game of the Co-operator’s General Insurance Barbados Amateur Basketball Premier Division Playoffs, Orange 3 Pinelands held off the charge of the Barbados Hilton Resort Warriors to edge over the line 82-77.
The Pine entered the game as the #1 seed and showed their class from the first whistle and jumped out to a 7-2 lead. Jeremy Gill controlled the ball and the pace of the game but had an odd first five minutes of the game where he coughed up four turn overs but the Warriors were unable to take advantage and the Pine held the five point lead to the end of the first quarter with the score at 25-20.
The second quarter was better for the Warriors with Nikolas King being more aggressive at the start. With a three pointer from the wing, King put the Warriors in front for the first time of the game 33-31 with 5:25 left in the quarter. Neither team was able to find that edge to pull away from the other, just traded baskets and matched the other’s intensity. Ian Alexander started out hot for the pine with free throw line and baseline jumpers but his spark died down in the second period. Charles Vanderpool who was having a quiet game so far showed he was still a force to be reckoned with as he faked to the middle and drove baseline to finish strong with a two hand slam on Jamar Headley, unfortunately coming from the weak side to help. Gill tagged Vanderpool on the way down the court and the energy seemed to transfer between the two because the next possession down the court with 45 seconds left in the half, Gill had his own highlight play with a cross over step back three that left Justin Maloney stumbling and looking to the referee for aid but as the saying goes on the courts of Bim, “There is not rice here”. Gill smoked the three and Maloney was left licking his wounds.
The second half started with the Pine up 46-45 and the two teams having a horrid first few minutes. There were turnovers and forced shots in a scrappy, nervous start to the third. The Warriors forced a couple turnovers off Pinelands but were unable to capitalise, by either missing the subsequent shot or turning the ball right back over to the Pine. The score was 54-53 to the Pine with 4:02 left in the third and the Pine slowly started to pile on the points by making the most of each possession led by Gill. The Warriors were the opposite as they started to scrimmage and played “iso” ball, with different players trying to take the game into his own hands, only to take a bad shot or miss badly on a forced shot. By the end of the third, the Pine had a small seven point lead 65-58.
The fourth was where Corey McDonald started to shine, taking any advantage given to him by the defense, hitting a three pointer and a put back as the Warriors started the quarter with a 5-0 run (65-63). The Pine scored on the next possession to put them back up by four and then six. Jamar Headley had a average game at best but had an “And 1” play and scored the free throw to bring his team within two (67-69) with 5:56 left in the game. The Warriors were fighting for the game and pushed as the Pinelands side to force two turnovers including traveling by Junior Moore. Another aggressive drive by Headley saw them tie the game at 69 all and then King hit one or two free throws and the Warriors took the lead 70-69 with 4:08 to go. Gill for the Pine never looked flustered and drove easily to the basket, was fouled and hit both shots from the line and the very next possession made a smooth euro step basket between Headley and another Warriors defender to finish with a finger roll at the ring. The two Gill plays put the Pine back into the lead and up by four (73-70 with three minutes to go. A free throw Junior Moore put the Pine up 74-70 with 2:20 to go. The Warriors were not going to give up that easily and Ricardo Toussaint made his own aggressive move the hoop to be fouled and hit both free throws (74-72) with 1:14 to go.
With 54 seconds left in the game Gill made a smart play off the ball creating a foul on Warriors which gave the pine two freethrows and the ball. Gill hit both (78-75) and on the next possession dished the ball to Vanderpool for the baseline dagger and the Warriors went down fighting 82-77 as the Pine ran out the clock.
Gill for the Pine and McDonald for the Warriors top scored with 28 points each and McDonald added 13 rebounds to a good night of basketball. Vanderpool, Alexander and Ramon Simmons all gave good support to Gill with 18, 14 and 12 respectively. Headley for the Warriors didn’t live up the expected domination but still had 15 points.
Maloney and King both added 11 while Ricardo Toussaint had ten off the bench.
Game two is slated tonight at the BCC and the Warriors will once again mount a challenge to the composed Pinelands squad led by Gill. A full game of team ball could see the Warriors take the win but it will only take half a quarter of poor play to see them go down again.