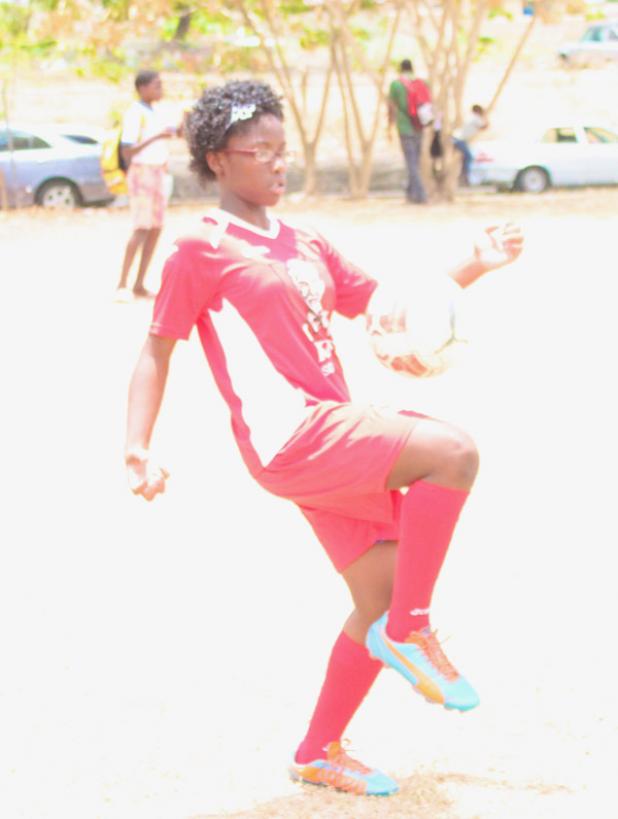 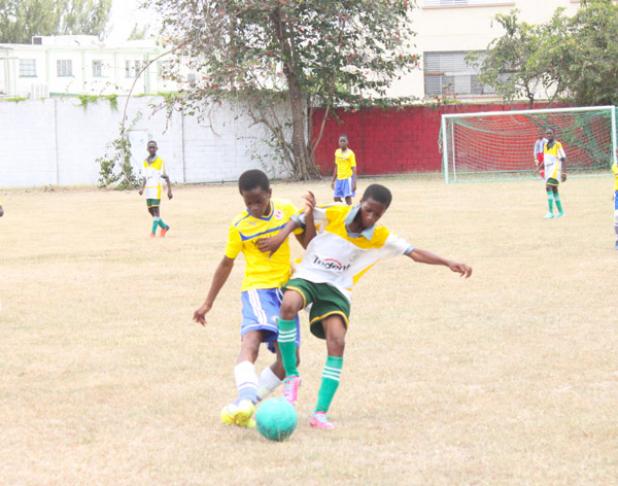 Parkinson got the better of Whitehall in the Under-13 Division when the two met up at Banks Brewery. 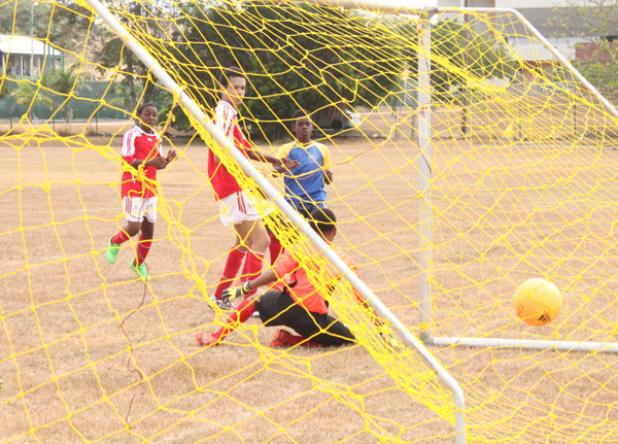 Tyrique Belle (right) watches as his goal rolls into the nets during the Under-15 clash between Pro Shottas and Kick Start at BET.

Pinelands field teams in all playoffs for Barbados Cup

Thu, 03/31/2016 - 12:54am
By Michael Phillips
Things are heating up as teams set up themselves in the final days of the 2016 Barbados Cup Youth Football Tournament. With the playoff rounds beginning today and the finals scheduled for tomorrow, the excitement has reached a fever pitch as all and sundry seek bragging rights and prizes for the 29th edition of the competition.
Teams had their last chances at qualifying for the knockout stage of the tournament yesterday, and Kick Start A booked a spot in today’s Under-11 semi-final after topping Zone A at Valerie. They rounded out the prelims with a 2-1 win over Brittons Hill. They will face the Zone B runners-up, West Coast, who took out Kick Start B in their final preliminary game. The other semi-final will feature Zone B winners, Pinelands and Brittons Hill.
Over at the old Banks Brewery facility, Parkinson have created history, making the playoffs for the first time in their 10 years of participation in the competition. They beat out Whitehall 2-0 to secure the berth in the Under-13 semis and will be facing Kick Start, who won a 1-0 game over Pro Shottas yesterday. Pinelands had smooth sailing into the semis after blasting EM Academy six goals to none. Led by three goals from 11-year-old Olianna Bishop, who became the first girl to score a hat-trick in the competition, two goals from Tyrell Haynes and another from Shabari Lynch, Pinelands signalled their intentions in taking home the division. They will face Cosmos, who blanked St. Mary’s two goals to none.
The Under-15 group, which has the highest participation, will be playing four quarter-final games today at the BET ground. Pro Shottas, who have two teams in the age group, topped Zone A after handing down a hot 7-0 thrashing on Kick Start. Thierry Gale started things with back-to-back goals in the second and third minutes, and Nathan Skeete was not too far behind to score in the sixth. Alec Kellman rocked the nets in the 12th and Tonas Thorne closed out the first half at five goals for Pro Shottas when he scored in the 25th. Going the other way, Tyrique Belle scored in the 29th and Abiola Grant was hot on his heels to net in the 31st.
This Pro Shottas team will be taking on the Ivy Rovers, who have been hailed as the most improved team of the tour-nament. Gall Hill have played unbeaten thus far and will be looking to hold that form when they take on Parkinson. Kick Start B had better luck than their clubmates as they won Zone C and will face a determined Whitehall. Pinelands are making yet another appearance, having booked spots in all divisions, and they are slated to take on Pro Shottas B.