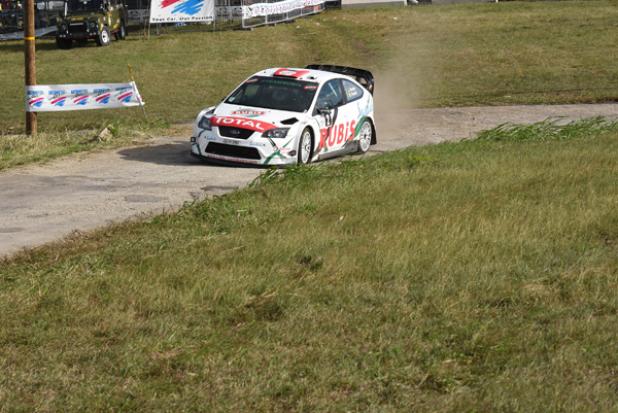 Mon, 06/06/2016 - 12:00am
By:
Corey Greaves
Jamaica’s Jeffrey Panton continues to lead the Sol Rally Barbados after the first day and up to the lunch stop on day two.
With eight stages completed, the defending champion, Panton, leads Frenchman Simon Jean-Joseph who was chipping away at Panton’s advantage before a flat tyre on stage 7 saw him lose about nine seconds.
On the first day and the first two stages, which were held at Bushy Park Racing circuit on Friday, Panton was leading with two clean runs, while Jean-Joseph, who had the two fastest times, had to add a time penalty for a jump start on stage 1 which put him 8 seconds behind Panton.
Winning stages four and five, the margin moved to four seconds, but the flat tyre  has given Panton some breathing room once again.
Jean-Joseph is still second as third place Rob Swann was over 11 seconds behind him after five stages.
Elfyn Evans is next in the order, while the highest place Bajan is Roger Mayers, who was fifth after five stages and the fastest two wheel drive.
Roger Skeete continues to move up the standings as he separated Josh Read and Mayers in the standings.
Kevin Procter was second after day one but slipped down the order and is just ahead of Dane Skeete and Roger Duckworth, who rounds out the top ten just ahead of Rhett Watson and Daryl Clarke.
Action was slated to continue into the night yesterday and move to the south of the island today.
The finish is scheduled for Vaucluse.