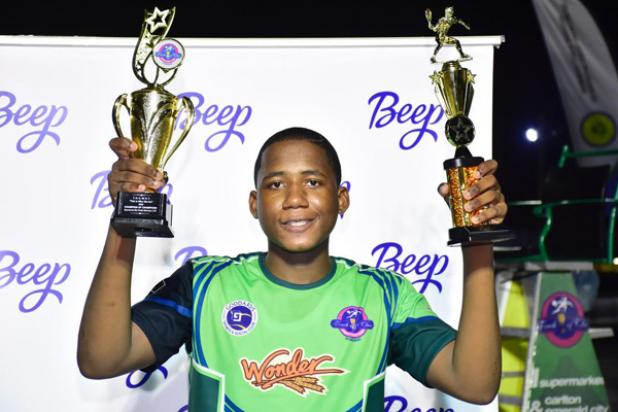 Shakeem Nurse is the 2020 champion of the 'This Is Who We Are' road tennis tournament, which concluded at the car park of the Hanschell Inniss on Tuesday in front of a huge gathering. He carried off the Champion of Champions title as well. 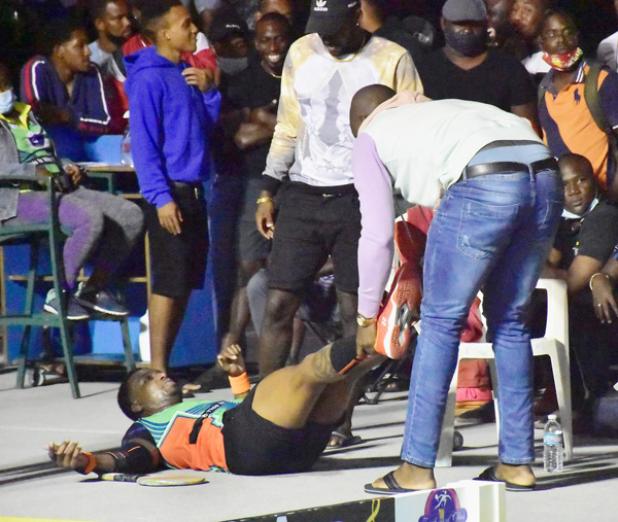 Aaron Barker had to seek medical help during the final match against Shakeem Nurse as his right leg seemingly picked up an injury. 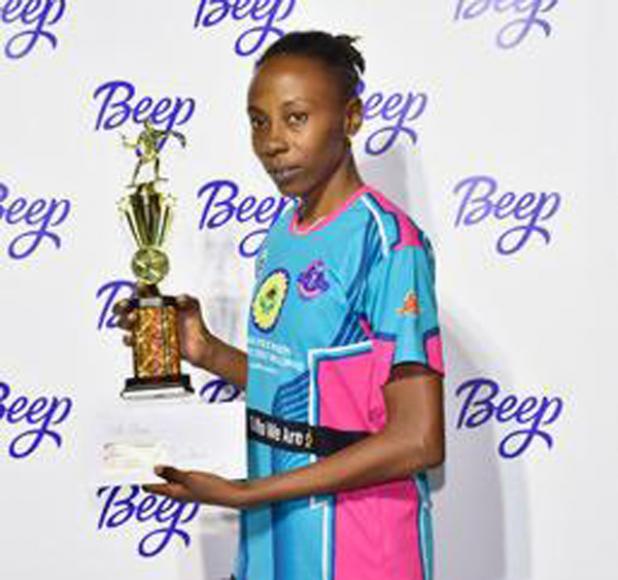 Shakeem Nurse is the This is Who We Are 2020 champion.

Playing at the Hanschell Inniss car park in the final of the men's Invitational hosted by the Goddard's Sports and Social Club (GSSC) and Touch of Class, Nurse and his opponent Aaron Barker started off the match in contrasting fashions.

Nurse was red hot in the opening game, while Barker was seemingly out of sorts with a number of spoils.

This gave Nurse the confidence to play some attractive attacking shots both off the backhand and off the forehand and he went on to 'Sow' Barker much to the surprise of the crowd 21-6.

It might have been the side of the court they started on as the players switched ends for the next game and it was the turn of Nurse to struggle.

Barker jumped out to a 7-0 run at the start and he too struggled to find his range and rhythm, committing a number of spoils similar to Barker when he played at that end.

Barker returned the 'Pig' to Nurse, closing out the second game 21-7.

However, it was at 7-5 in the third game with Nurse leading that the entire complexion of the game changed.

Barker hobbled off to the side of the court and had his right leg worked on for a few minutes. Shortly afterwards he tried to continue, but was forced to take a medical time-out.

Nurse did not let the opportunity pass him, working Barker around the court to exploit the limping player.

At 9-6, Barker made a slight resurgence to close to 18-8, but his mobility around the court was compromised and it affected his shots which began to spoil and Nurse went on to win 21-15.

In the Ladies' Division, it was Rachel Smith who came out on top. Founder of Touch of Class, Juliet Worrell, credited Smith for inspiring her to start the organisation after she played and was beaten by Smith a few years ago.

Smith and Maudlyn Blunt had an exchange of shots and strokes and the game was close until Smith won 21-19.

The second game went the same way after Smith had jumped out to a 7-3 lead before Blunt managed to draw level at 9-9.

The momentum continued to be held by Blunt, who pulled away from 13-13 to a 16-13 lead before Smith wrestled the momentum back to level the score at 16-16.

Blunt managed to settle and go on a 5-1 run, thanks to some spoils by Smith in the dying moments.

In the decisive game, Smith took the lead and never surrendered it, even winning all five of her service points as well.

Smith went on the attack after she had a comfortable 14-6 cushion to cruise to a game and match victory at 21-11.

In the Champion of Champions match between Nurse and Bates, Nurse was a clear winner, running away with a 21-8 victory.  (CG)