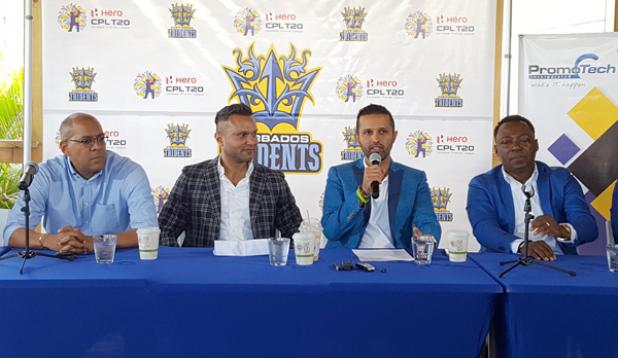 THE Barbados Tridents have a new ownership team in place who have taken over the running of the franchise with immediate effect. They have also announced that West Indies Test and ODI captain, Jason Holder, will be their Marquee Player for the 2019 Hero Caribbean Premier League season.

The USA-based CMG Companies (CMG) leads a team of local and international investors in the acquisition of the cricket franchise in Barbados. CMG, through its affiliates, primarily owns and operates franchise restaurants, hotels, and real estate across America and is one of the largest owners of a major fast-food franchise. CMG is also no stranger to sports, with sponsorship deals with NBA teams including the Dallas Mavericks, several similar initiatives at the collegiate and grassroots level, investment in Major Arena Soccer League’s (MASL) Dallas Sidekicks, along with past ownership of CPL’s very own Jamaica Tallawahs.

Manish Patel, Principal of CMG, said: “Selling our ownership rights of the winning Jamaica Tallawahs held from 2014-2016 was the right move for us as a business, but we missed being involved in the Region and in CPL. When the chance to purchase the Tridents came along we were delighted, especially with the opportunity to bring good strong local partners onboard. We can’t wait to get started at enhancing the profile of this team on and off the field and to bringing a comprehensive sports entertainment package to Barbados. We will work very hard to make Barbadians proud of their team.”

New co-owners and local entrepreneurs Kailash Pardasani of Promotech, and Terrol Cummins and Arvind Gopwani of Silver Technetium Capital Inc. (STCI) are excited about the opportunity for Barbadians to venture into sports entertainment in an era where the new format of cricket has generated renewed excitement in investment opportunities worldwide including India, Australia and the UK, among others. Tridents Co-CEO Kailash Pardasani reveals that the investment by local partners is “an investment in Barbados and a vote of confidence in the resilience of its people and the resurgence of the country as a whole. Cricket has been an integral part of the fabric of our society and has uplifted and united families and entire communities. We are investing in that. We couldn’t ask for better investment partners and for a better time to place our money and efforts while continuing to be huge fans.”

Pete Russell, COO of Hero CPL, said: “The issues that the Tridents have faced in recent months have been well documented and are being fully addressed as a priority. We have been working tirelessly to find a solution and we believe that this international-local investor collaboration is the ideal solution. This is a group of passionate cricket fans and astute business minds who have experience of successfully running a CPL franchise. The Tridents are in safe hands and the issues the franchise has faced are a thing of the past.”

The arrival of an experienced and successful ownership team means that the Tridents will now enter the 2019 tournament on a solid financial footing and with a clear plan, both on and off the field. Local investors in the Tridents are focused on renewing the connection between the franchise and the local community, through partnerships with the Barbadian business community and a line-up of fan-centric events and content.