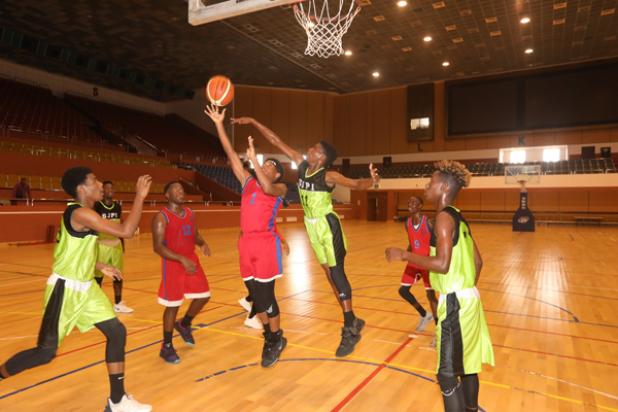 The paint was the playground of Khaleel Wilkinson of Harrison College as he took on the SJPI defence.

It may have been a low-key third place game, but Makhaya Moore did not mix matters, scoring a game high 37 points to lead Queen’s College over the defending champions, the Samuel Jackman Prescod Institute of Technology (SJPI) 82-33.

The game should have been a battle between two teams looking to go out with some pride, winning their last game of the National Sports Council Schools’ U19 League season. However, what happened was that Moore outscored the SJPI effort all by his lonesome.

Queen’s College came to win and the 22-4 first quarter scoreline spoke volumes of their effort. Moore wove his way through the defence, putting up 12 points in the quarter.

The tall and lanky Moore, who is the top player for QC, continued to motor along with 13 in the second and 10 points in the third. By then SJPI were down 40, 66-22, with just the fourth quarter to play.

Coach Ryan Holford decided that enough was enough and took Moore out of the game with 6 minutes still to go in the game. The reasoning was sound – being up by over 40 points, protecting Moore against any unforeseen injury on court against a team who did not even put their best player into the game.

Deroni Hurley of SJPI made a miracle in the semi-final match against Harrison College last week, but it was not enough to win the game and take them into the final. Hurley is easily the most talented player for SJPI, but with players on the bench who had not touched the court throughout the season or had only ‘garbage’ minutes off the bench, Coach Andre Harvey decided to give them all an opportunity on the court.

That decision was arguably the reason SJPI lost, but the long-term development was the big picture. Hurley was the engine behind the SJPI squad all season long but the SJPI coach must be commended for giving all his players those confidence- boosting minutes in the game.

The lack of experience and firepower in the game clearly showed with SJPI mustering only 4 points in the first quarter and 2 in the third. They rallied to close out both halves well but the margin was too great and QC narrowly missed out on a 50 point victory.

Moore was supported by Nicholas Grimes with 15 and Khaleel Wilkinson with 9 points. For SJPI, Miguel Gibson fought valiantly for his 11 points in the game while Simon Hinds and Nathan Estwick both scored 5 each.

The final for the National Sports Council Schools’ U-19 League is slated for this afternoon at 2:15 p.m. at the Garfield Sobers Sports Complex, featuring Harrison College and Combermere.
(AS)