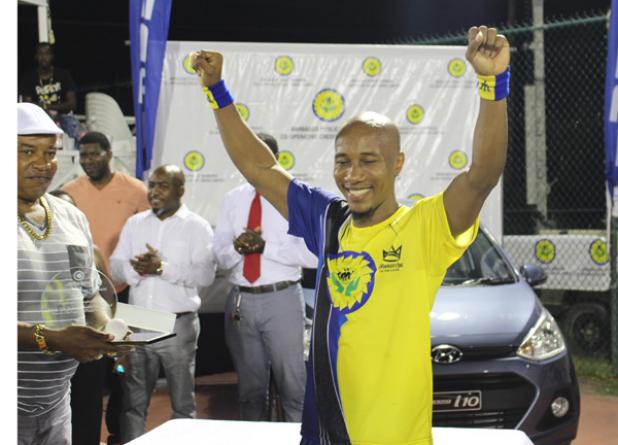 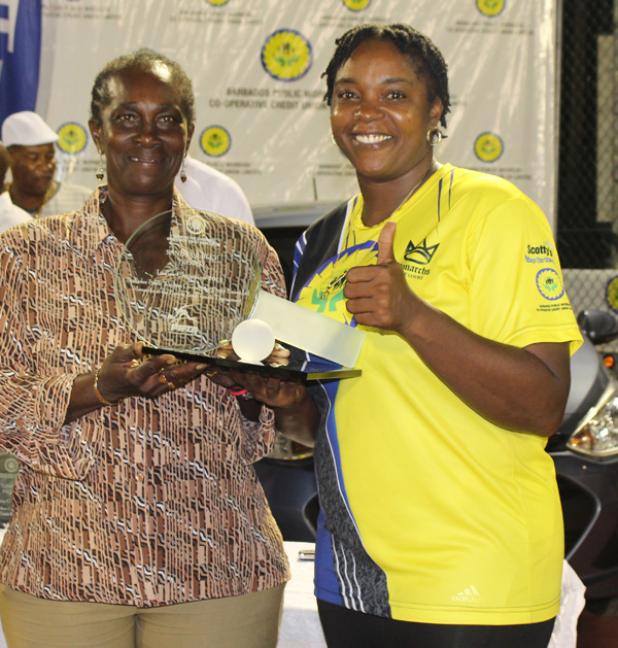 Women’s champion, Kim Holder (right), is presented with the trophy by Sandra Bailey after she defeated Sheldene Waldron. 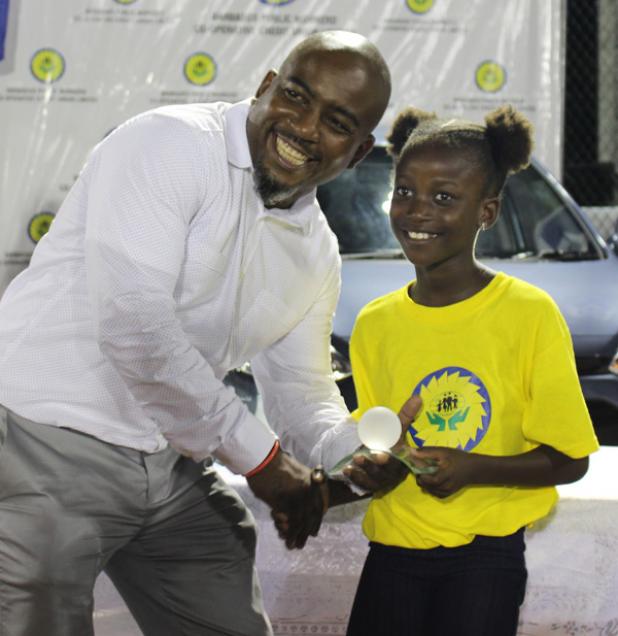 Mark Griffith, Kim Holder are King and Queen of the Court

Mon, 10/17/2016 - 12:00am
By:
Corey Greaves
Mark ‘Venom’ Griffith is the 2016 Barbados Public Workers’ Co-operative Credit Union Limited Monarchs of the Court Road Tennis champion.
Griffith, who was the defending champion, defeated the No. 3 seed Antoine Daniel in straight sets 21-14, 21-15, 21-17, on Saturday at the BET Hard Court.
Griffith said that he noticed Daniel was a bit laboured in his movement on the court and he capitalised on that to drive off with the grand prize of a Hyundai Grand i10.
Daniel had a gruelling five-set semi-final match against Julian ‘Michael Jackson’ White, which took a lot out of him and Griffith took note.
Moving the ball from left to right, Griffith was never in trouble during the final and when he saw Daniel looking to favour one side of the court in order to go for the winner, he would move the ball wide to the other side.
Unlike the other matches, this match was over in a flash despite being a best of five and not a best of three.
It only took 41 minutes for the winner to be decided as the rallies were shorter and the action kept constant.
Daniel said that he knew he was in trouble when he felt a pain in his left leg and against a quality player like Griffith, one could not afford to have their feet not moving as they should.
Griffith also noticed it, although to some spectators it was not visible and Griffith kept the ball moving and forcing Daniel to move from left to right.
With his feet not getting to the places they should, Daniel spoiled the ball a number of times, although he did offer some magical moments in the game with cross-court passing shots and some down the line as well.
However, the play of the game belonged to Griffith, which came in the second game.
Daniel played a backhand injection, which Griffith incredibly got to, but he had slipped and fallen on his backside. Daniel pushed the return deep to the back line, which saw Griffith get up and sprint to the back line to once again present the return to Daniel, who was not expecting it as he had seen Griffith slip and fall.
Daniel then popped up the surprise return to Griffith, who crunched it for a forearm winner.
Griffith was initially down in this second game 8-4, but levelled the scores 8-8 and then pulled away never to trail again.
The third game was one-sided with Daniel trailing from early and never recovering.
After the match, Griffith said that he had done a lot of training on and off the court for the tournament.
Griffith lost all his matches in the shot gun tournament to White and said he was heavier than what he normally plays and because of that he went into training to get down to his competition weight, which was ten pounds lighter.
Daniel mentioned that that match against White on the Wednesday did take a lot away from him and with the final on the Saturday, he had not fully recovered which may have caused his injury.
In the women’s final, Kim Holder defeated Sheldene Waldron in straight sets 21-14, 21-14.
Holder said that in the second set when Waldron was leading, her coach told her that Waldron was playing a slow game, which meant she could not go for her shots as they would spoil.
Adapting to the change, Holder went for placement instead and after trailing 12-6, went on a 6-0 run to level the scores.
With Waldron caught, Holder kept the pressure on and after the scores were levelled on 13-13, she closed out the set with a 8-1 run to claim the title and the $15 000.