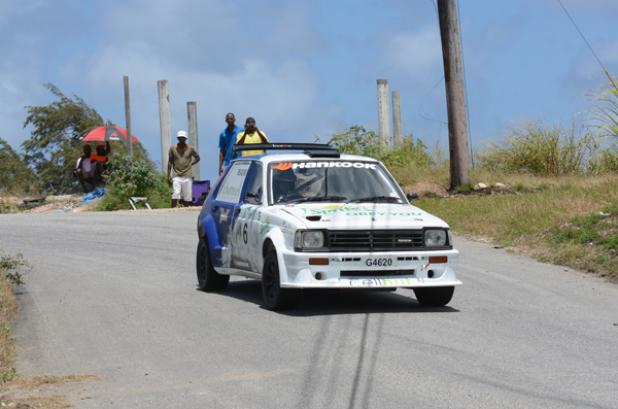 Josh Read was the overall winner in both directions of the MCBI double header.

Read at the helm of his two-wheel-drive Toyota Starlet fought off an early challenge by Dane Skeete in the Peugeot 306 Maxi which only completed one official run during the day at Diamond Corner.
With the early retirement of Roger Hill in his Toyota Corolla WRC as well, Read was virtually untouchable as he claimed victory in the first direction with a time of one minute 15.34 secs. This time was recorded in his third and final official run as he was fastest during the day in all of the runs.
Just over two seconds adrift of Read, who also claimed the title of fastest two-wheel-drive and winner of SM2, was Andrew Mallalieu in his Subaru Impreza Group N car with a time of one minute 17.43 secs.
Despite only getting in one run after practice, Dane Skeete was third overall and second in SM2 with a time of one minute 17.62 secs.
Andrew Jones was fourth in his Ford Escort (1:18.18) and Adrian Linton rounded off the top five with a M2 class victory in his Vauxhall Astra (1:19.76).
Other class winners included Stan Hartling in his BMW M3 winning SM3, Neil Corbin in his Toyota Starlet won M1, Ryan Wood in his BMW E36 T1 won the Clubman class and John Corbin won the Historic class.
In the reverse direction it was still Read with the fastest time which was 58.52 secs.
The only one to record a sub-minute time Read was once again the fastest on all three official run leading all the way to the end.
Mallalieu was second once again in one minute 1.23 secs, while Andrew Jones moved up to third place.
Neil Corbin had an impressive run it the reverse direction and he was fourth overall just ahead of Jamal Brathwaite who won the M2 Class in this direction.
Stan Hartling carried off the SM3 class victory. Rommell Martin won the Clubman class, while John Corbin win the Historic Class. (CG)