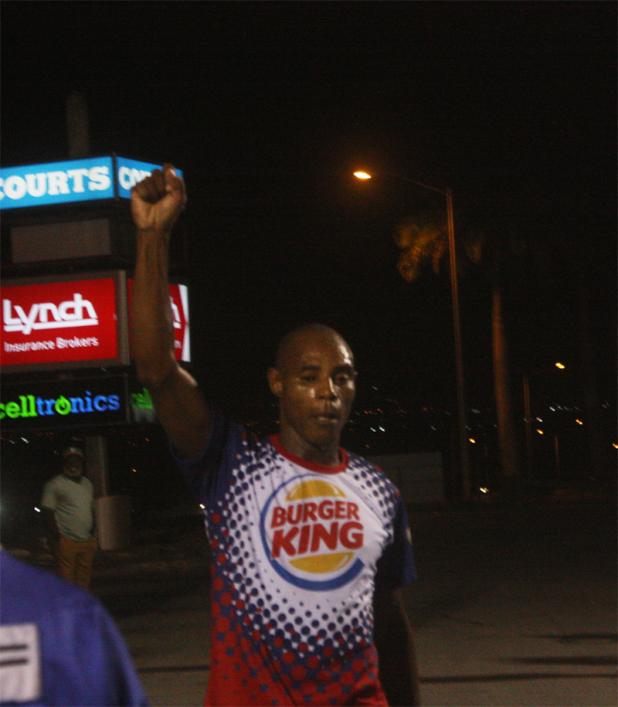 Wed, 05/25/2016 - 12:00am
By:
Corey Greaves
An aggressive Julian ‘Michael Jackson’ White carved his way to victory in the first instalment of the Burger King Invitational Road Tennis tournament.
White faced off against Mark ‘Venom’ Griffith in the final which was contested after midnight in the car park of Sky Mall on Sunday and though some had already left many enjoyed the see-saw battle between two talented players.
White was the more aggressive between the two players working Griffith into a corner with some deep angle shots before crushing some impressive cross court winners.
But Griffith is known for his impressive work ethic during the games and his quick footwork which he displayed yet again in the final of the shot gun tournament that had over 45 competitors.
The see-saw battle started from early as the two traded points and the score was locked at 5-5.
However ‘Jackson’ managed to open a small cushion thanks to some passing shots and move to 7-5.
This seemingly sent Griffith into another gear and it was Jackson who was still attempting his aggressive shots that start to spoil the ball allowing Griffith to go into the lead 10-9.
In the later moments game saw Griffith steering victory in the face at 19-16 as Jackson continued to spoil the ball as he did not take his time to set up the play.
But the veteran players settled down and went back to the strategy that was working to deuce the game.
With each player having the opportunity to win the game it was ‘Jackson’ who sent down two back to back winners to win 26-24 and win the first of three planned shot gun tournaments. (CG)