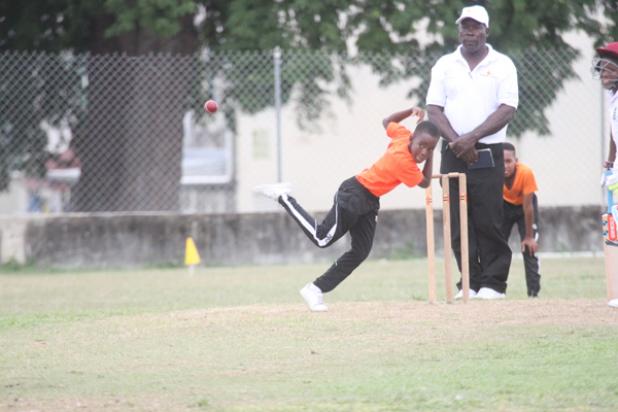 Dimitri Garraway missed out on a hat-trick on this ball after taking back-to-back wickets.

Ignatius Byer continues to blow the competition away as they sit atop Zone A1 in the National Sports Council Guardian Group Herman Griffith Primary Schools’ Cricket Competition.

Playing in their latest game on Tuesday, they blasted Half Moon Fort Primary to bits to take away a 209-run win at Lowlands in St. Lucy.

With the hosts going in to bat first, Rajai Gibbons and Tyrese Hurley did all the work as they struck up 107 and 70 respectively to take their team to 227 without loss in their 25 overs. Rain threatened many matches across the island but that did not matter as Half Moon Fort were all back in the pavilion for 18 runs. Ian Boyce took four wickets for
nine runs while Gibbons snapped up five for just 12.

The defending champions, A-Class Battery Bayley’s Primary, are on stream to make the playoffs as they seek a third-straight title, and they added the scalps of Hilda Skeene Primary to their tally this year after winning by 105 runs. Batting first on their home field, they made 128/4 with Jayden Chase (59*) and Shai Thorne (33) top-scoring.

In their reply, Hilda Skeene were skittled out for just 23 with Chase taking two wickets for 10 runs; Thorne taking three for six; Javion Batson nabbing three for two; and Ramiro Stoute snatching up two for five.

Over at Hillaby, Gordon Greenidge took a 65-run win over Hillaby Turner’s Hall after whipping up 124 for two in 15 overs.With Amal Francis and Amar Ishmael both scoring 15, it was a knock of an unbeaten 30 from Javed Worrell that took the Gordon Greenidge boys to the total. Worrell starred in the defence of the runs, taking three scalps for 18 runs as the hosts limped to 59/6 in their 15 overs.

Lawrence T. Gay and Westbury Primary had their match at Passage Road rained out before either team could take the edge.