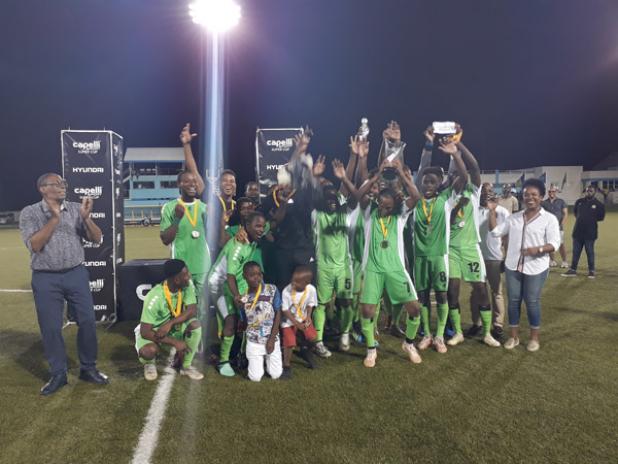 Inaugural Capelli Sports Super Cup champions, Weymouth Wales, raise the trophy as they are flanked by Minister of the Creative Economy, Culture and Sports, John King (left), and Minister in the Ministry of Economic Affairs and Investment, Marsha Caddle (right). 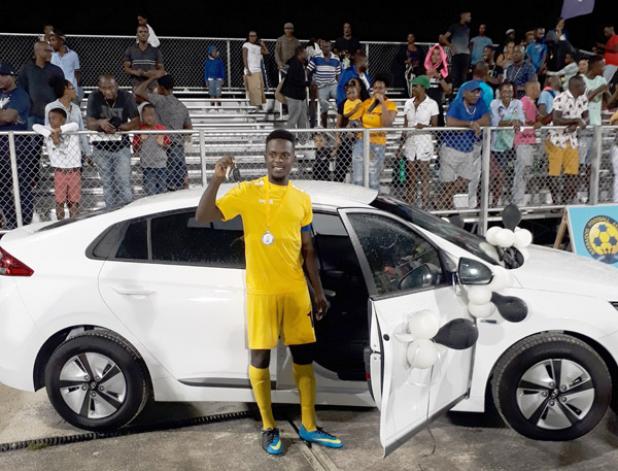 Tournament MVP, Shakille Belle, showing off his keys as he steps into his brand new vehicle. 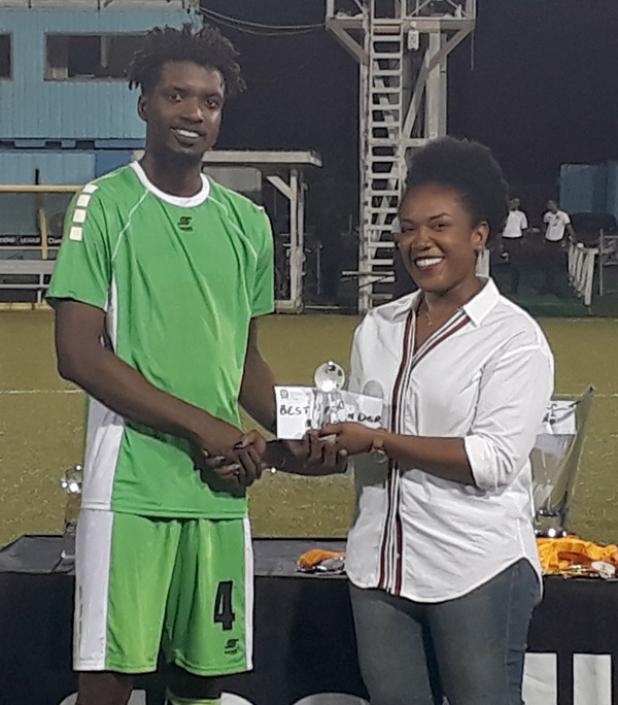 Ramar Millar of Weymouth Wales receiving his Best Defender Award from Minister in the Ministry of Economic Affairs and Investment, Marsha Caddle.

ALL it took was a single goal in the dying minutes of Sunday night’s Capelli Sports Super Cup final and Weymouth Wales were $50 000 richer. Closing out a stellar season which saw them taking home the top prize in the Champions Cup in the middle of the year, Wales continued to show why they are a powerhouse in local football by edging out Ellerton FC in the inaugural tournament.

Playing in front of a capacity crowd at the Wildey Turf, Ellerton put in a spectacular performance as they controlled most of the game, much like they did for the entire competition. However, after not losing a single game, their run of fine form was brought to an abrupt end in the 90th minute.

Unable to make a single one of their many chances count, Wales captain Hadan Holligan punished the St. George side just before the end of regulation time. Star midfielder Romario Harewood picked up the ball on the right from a throw-in by Ricardio Morris before cutting in to the penalty area. By then, Holligan had positioned himself just on the edge of the area to call for the ball, which Harewood served on a platter with pinpoint accuracy. Pulling to the left with his right boot to shake off his first defender, Holligan shot with his left past a second and tournament Best Goalkeeper Jamar Brewster to send the crowd into an uproar.

Speaking to members of the media just after the win, Head Coach Thomas Jordan said that he was pleased with the outcome of the game and the late goal.

“It was good because it came at the opportune time. We scored at the right time because we were under pressure for most of the game. We had to change our game-plan because of the tactics of the Ellerton squad – they are fit, they are young, they are fast. So we had to be more conservative, but we knew that in the end we would prevail because they would lose their sting,” he said as he revealed that Holligan had to be deployed a bit further back in the formation in a bid to counter the speed of the young Ellerton side, which boasts the likes of Shaquan Clarke, Roshon Gittens and Shakille Belle.