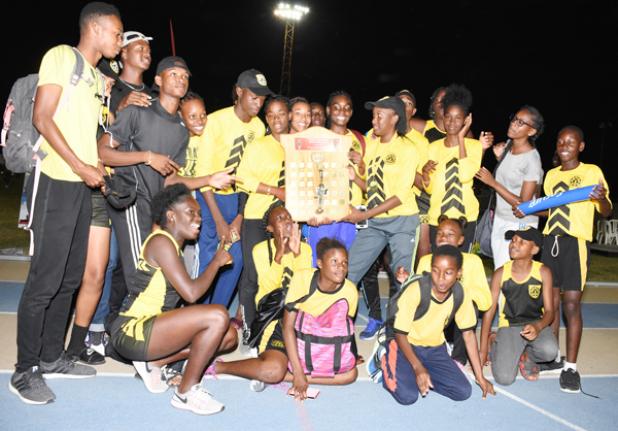 It was a Trifecta for Christ Church Foundation School when they won their third consecutive BSSAC Girls’ title at the National Stadium yesterday, all be it shared with St. Michael’s. 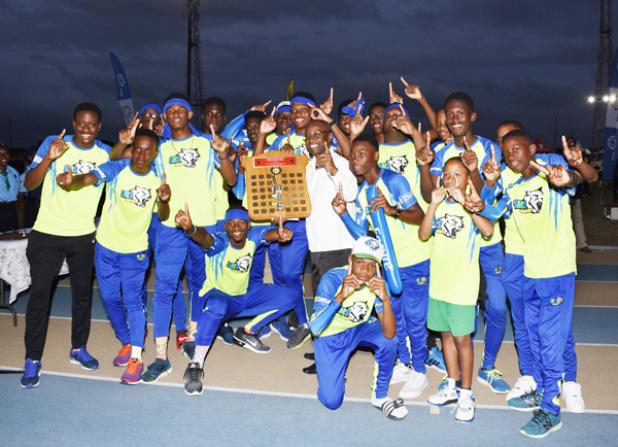 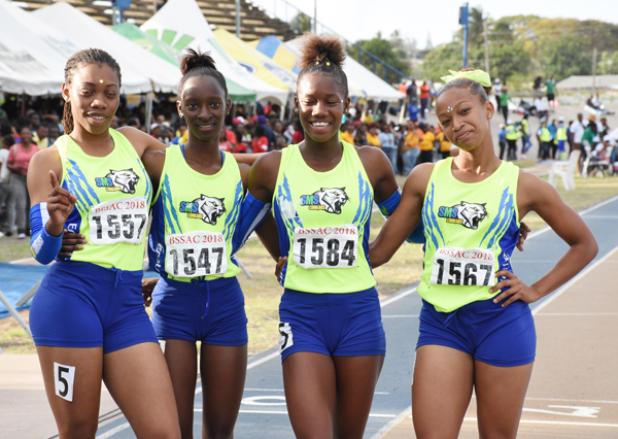 WITH everyone standing almost trackside, an epic battle for the Girls’ title went down to the last girls’ relay of the day with two points separating first and second place. When the final shoe crossed the line, Christ Church Foundation School and The St. Michael School Cougars had created the first-ever tie for the Girls’ crown of the Powerade Barbados Secondary Schools’ Athletics Champion-ships (BSSAC).

The true thoroughbred tussle saturated the day between Springer, Foundation and St. Michael’s for the Girls’ title. Rhea Hoyte ran a boss final leg of the Open Girls’ 4x400m Relay, getting ahead of Rosette Hoyte early and maintaining the lead to the end to create history. The result was St. Michael’s being double champions – tying with Foundation, who secured the trifecta, in the Girls with 326 points; and winning the Boys’ outright, successfully defending their title with 310 points.

On 300 points third place went to Springer Memorial, after a valiant effort to retake the now elusive crown. Fourth and fifth were secured by Harrison College and Lester Vaughan School with 180.50 and 130 points respectively. The St. Michael’s ‘double’ crown, the first in 21 years since Combermere reigned supreme in 1997, was cemented when Antoni Hoyte-Small ran home to a new Boys’ Open 4x400m Relay record of 3:11.95 minutes, erasing Ellerslie’s 2011 time of 3:13.77. With that victory, they finished with 310.50 points, Foundation was second on 284 and with 263.50 Harrison College took third place. Queen’s College had 175 points for fourth and St. Leonard’s Boys were fifth on 162.50.

Ashleé Lowe of Cougars topped Hannah Connell in the Under-20 Girls’ 200m in 24.15 seconds. It has been a good track season for Lowe and the gold medal was well deserved, but Connell, who finished in 24.75, would have been disappointed with not being able to win both 100m and 200m sprints. Josiah Atkins of Foundation, however, was able to achieve that task after holding his form through the line to outlast birthday boy, Matthew Clarke of St. Michael’s. Atkins ran 21.62 seconds, Clarke clocked 21.70 and Antoni Hoyte-Small also of St. Michael’s took the bronze in 22.02 seconds.

Leilani Haddock of Foundation got her revenge over Rickyla Fagan of Deighton Griffith after being beaten in the Under-17 Girls’ 100m on Thursday. Haddock ran down Fagan to win gold in the 200m in 25.13 seconds while Fagan was second in 25.28 and Kamille Gaskin was third in 25.48 seconds. Darian Clarke of St. Michael’s also completed a double gold when he won the Under-17 Boys’ 200m. He had a scare with 15m to the finish when he grabbed his right hamstring for a second and held his nerve to the line all the while holding off Jean-Pierre Hinds of Foundation. Clarke clocked 22.56 seconds and Hinds finished in 22.62 with Ori Edwards taking bronze in 23.07 seconds.

The phenomenal Aaliyah Agard of Frederick Smith set herself apart when she slammed the field in the Under-15 Girls’ 100m Sprint in 12.45 seconds. Closest to her in second was Nya Browne with 12.83 and Kishawna Niles was third, clocking 12.93 seconds. Shonte Morris ran through the line in the Under-13 Girls’ 100m. She let the race develop and kept her feet turning over to stride past Skye Spencer-Layne of the Cougars to finish in 13.43 seconds while the latter finished in 13.49. Ciara Piggott picked up the bronze with her time of 13.67 seconds. Sean Raphael was the fastest Under-15 Boy, winning the Boys’ 100m in 11.64 seconds while Tyjah Bishop of St. Leonard’s took the Under-13 gold in 13.09.

Harrison College’s Triston Gibbons completed the double in inspiring fashion when he broke his own record in the Under-20 Boys’ Shot Put of 18.63 with his heave of 18.68m. He had already broken the Under-20 Boys’ Discus record on the first day of the finals and now will be focusing on the 2018 CARIFTA Games. Shanice Hutson of Coleridge and Parry also did the double on the field after winning the Under-17 Girls’ Shot Put on Thursday. She threw to gold with a 39.20m effort in the Under-17 Girls’ Discus and like Gibbons will be only thinking about CARIFTA.

The Under-17 Boys’ Javelin was dominated by Queen’s College with Nicholas Grimes and Kevin Hinds winning gold and silver with 51.68m and 48.33m throws. Nathan Crawford-Wallis of Foundation won the Under-17 Boys’ High Jump at a height of 1.89m, beating St. Leonard’s Boys’ athlete Brandon Fan Fan into second with 1.86m, after matching jump for jump till the penultimate height. Cougars’ Antonio Farrell had no such issues as he competed by himself three heights onwards in the Under-20 Boys’ High Jump after the competition bowed out at 1.88m, namely his teammate Jonathan Miller who was in second. Farrell soared to 2.00m to win the gold in the event.

Under-13 Boy Duncan Daniel and Under-15 Boy Kobe Hutson did Foundation proud by winning their respective 400m races. Gold was Daniel’s colour with a time of 60.95 seconds and 52.69 was Hutson’s time. Briana Baird took the Under-13 Girls’ 400m crown in dominant fashion, clocking 62.58 seconds and Tiara Stewart was just as good in the Under-15 Girls’ 400m for her 58.45 seconds gold medal time.

It was an outstanding championships where all the athletes performed tremendously well. They were part of an excellent showcase of upsets and tears coupled with celebrations and smiles for what could be considered the best start and finish to the Barbados Secondary Schools’ Athletics Championships in years.